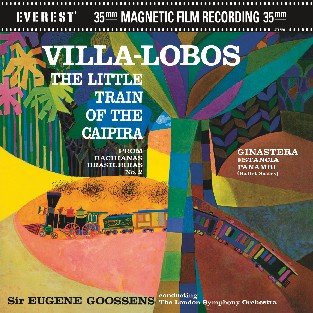 When I was a boy, my parents would often take us—in the Spring, of course—to Symphony Hall to hear Arthur Fiedler conduct the Boston Pops. We’d sit at a table, and the waitresses would bring us “Pops Punch”, cheese and crackers, and other treats. The music that we would listen to was excellent stuff, and the spectacle was impressive.

Listening to this LP brought back fond memories of childhood evenings at the Pops. (I’ve only returned once since Arthur died; somehow it’s never been the same for me.) The Little Train of the Caipira is exactly the sort of music that would have been played: Telling a story, straightforward, dynamically “out there” and—let’s admit it— fun.

The Brazilian composer, Heitor Villa-Lobos, is probably the best known classical composer from Latin America. (A cynic might say that this is like being the tallest Munchkin in Munchkinland, though a listen to Villa Lobos’ music should quiet any cynic.) Villa Lobos died in 1959.

Alberto Ginastera was an Argentine composer of classical music of Italian and Catalan background. He passed away in 1983, but not before one of the movements from his piano concerto was covered by Emerson, Lake & Palmer (Toccata, from Brain Salad Surgery). Reportedly, Ginastera both permitted ELP’s use of his music and approved of the final result.

The Villa-Lobos piece (only about four and a half minutes long) begins slowly, almost ominously, with a slow rhythm played in the percussion (including a variety of “native” instruments) and bass strings while the violins play a high note above it all. You hear, almost feel, the train slowly beginning its journey, as the rhythm of the steam release—sometimes syncopated—gathers speed. After several measures, the theme emerges, as the percussion continues to chug along. The theme is embellished as the piece progresses, horns echoing the train’s horn, drums signaling the bumps along the way. As the train approaches its destination, the entire orchestra slows down, bit by bit, until the remaining steam is let out and a strong chord ends the trip.

The first of the two Ginastera ballet suites, Estancia, asserts itself quickly following the almost cartoonish quality of the Villa-Lobos piece. While still relatively light classical, this sounds like much more serious music. Estancia is broken into four movements, The Land Workers, Wheat Dance(a gorgeous, almost impressionistic piece), The Cattlemen and the rollicking Final Dance “Malambo” with its crazed xylophone, frantic pace and thundering timpani in the finale.

The second suite, Panambi, begins by contrast very quietly with the first movement, Moonlight on the Parana, evoking a dark night in the Amazon. The composition is dreamy, almost Satie-like. Ginastera evokes insect and animal life in this movement. The contrasting second movement,Invocation of the Powerful Spirits, is played by brass and percussion only and has a raw, primitive feel, again contrasting with the serene third movement, Lament of the Maidens. The Maidens manage to pick themselves up by their bootstraps for the more lively Rondo of the Maidens, before Ginastera closes out with the explosive Dance of the Warriors.

This LP is a Classic Records reissue of the original Everest album, which was released in 1960. Bernie Grundman mastered this reissue, using the original 35mm tapes using Classic’s tube cutting system. It’s pressed on Classic’s 200 gram “Super Vinyl Profile II” (not their newer translucent “Clarity Vinyl”). I have oft been astonished by the incredible quality of recordings made (especially on the Everest and RCA Living Stereo labels) in the 1950s and 1960s. They typically put to shame most “mass market” vinyl of the sort with which I grew up. This LP is an excellent example of how good the original engineering was. There is a sparkle to the sound of these pieces, matched with meaningful “oomph” on the bottom end, which engages the listener in the first few seconds and does not let up. Do you want delicacy and finesse? You’ve got it. Thundering crescendi? Yep, they’re there too. Lest I’m being too subtle: The sonic quality of this reissue is absolutely superb.

Good sound is for naught if out of the sleeve comes a warped, scratched or otherwise damaged LP. Such is not the case here: This LP arrived flat, shiny and quiet (even on the “torture test” Sumiko cartridge which has an uncanny knack of picking up every imperfection in the groove).

Packaging is excellent as well: A heavy card stock jacket, beautifully printed, with a plastic-lined paper inner sleeve. And get this: It has an obi as well! The whole shebang is slipped into a Mylar outer sleeve. Like I said, excellent packaging that makes you feel like you’re getting your $33.00 worth.

It’s easy to say that this LP contains “light” classical music that will appeal to the more casual listener. While this music isn’t Wagner or Mahler, it is nonetheless music composed seriously, performed sensitively, and produced immaculately by Classic Records. It’s well worth acquiring for the collection.