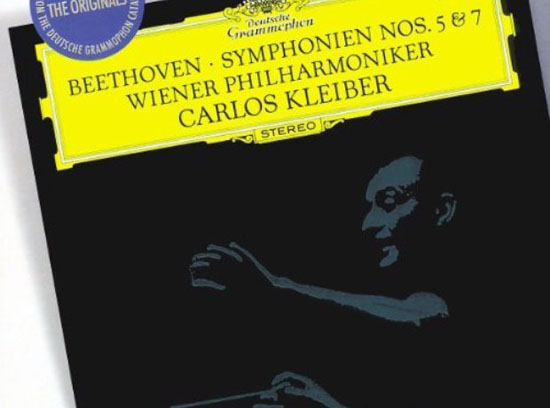 The greatest recording ever made of Beethoven’s Fifth now makes its way onto SACD. It isn’t perfect – not that it could be – but this hybrid CD/SACD release is the finest incarnation yet of the inspired Carlos Kleiber’s legendary Vienna Philharmonic recording. The additional bonus for surround-sound listeners is that when this recording was originally made in 1975, quadrophonic sound was being toyed with, so Deutsche Grammophon made the recording in surround sound. Finally this release allows us to hear it in its full multi-channel glory. The multi-channel sound is 5.0 (3/2.0), without a separate low effects track, thus the bass is shallower than in many modern recordings, but it is by no means inadequate, considering that Beethoven’s orchestra of the early 1800’s did not call for the use of as many extended low registers as later composers such as Mahler or Strauss. This disc also contains the same team’s performance of Beethoven’s Seventh from a year and a half later. It is not quite in the same league as the Fifth, neither as performance, nor recording, but it is a logical and welcome filler for this release.

First to the Fifth: Kleiber’s recording of the Fifth has been generally hailed as the best recording of the piece ever made and the performance deservedly receives a 100% score in that category. It is visceral and alive to all the shifting moods of the work. It flows along at fast speeds, but never becomes breathless or hard-pressed. In parts, it becomes possessed with unstoppable momentum. Kleiber’s touch is all the more assured for being light: One doesn’t sense here the “hands-on” micromanagement of a Simon Rattle, yet his hand is always near the wheel so he can steer the orchestra through any pitfalls they encounter. That approach proves inspirational to orchestras, but it also calls for an exhausting level of alertness and involvement from the conductor, so it is no surprise that Kleiber has made few appearances and even fewer recordings over the years. Herbert von Karajan once commented that Carlos Kleiber only comes out to conduct when his large freezer runs out of food. Pity for music lovers everywhere that Kleiber had the brilliant idea over a decade ago to lead the Vienna Philharmonic in its popular New Year’s concert, and to auction the video and recording rights off to the highest bidders. Those recordings have yet to go out of print, and they have guaranteed a comfortable retirement for the shy, high-strung maestro. So this is very likely to be the only recording we’ll ever have by Kleiber of the Beethoven Fifth. That’s okay, because it is largely a triumph, with as furious a knocking of fate in the first movement as anyone could want.

Although this performance was recorded before historically-informed practices had made any significant inroads to the mainstream, Kleiber’s approach still holds up well. One could even say that his crisp textures and fleet speeds anticipated the coming wave of musical fashion, but such alert poise has always been typical of his approach. The surround sound mix is glorious in this work, capturing a welcome and realistic hall ambiance in the rear channels. In the dramatically changing dynamics of the first movement, one can hear the big chords roll past, defining the depth of the shoe-box shaped Musikvereinsaal in Vienna. The overall capture of timbres holds up well in comparison to modern recordings, especially in this SACD reissue. It is a step up from its first CD incarnation back in the 1980’s, but I have not heard the re-mastering released in DG’s “Originals” series. The surround sound enhances the juicy richness of the textures, and adds great depth to the reverberation. The orchestral tuttis do have a tendency to get a bit clangorous, and some inner detail is lost in the reverb, but this was one of DG’s finest recordings of the 1970’s, and it remains fine now. One problem that no reissue of it can correct, however, is the unfortunate decision by the producer and/or engineer to not preserve the same microphone setup throughout the recording sessions. What this means is that the first movement is rather close-up – very red-blooded and visceral. On SACD, you can hear the bows bite into the strings more than ever before. But for unknown reasons (just forgetfulness on a different recording date?) the pickup is just a shade more distant and less visceral for the remaining three movements. The difference is subtle, but it is there. Typical of the recording era, the timpani are spot lit a bit more than is necessary – perhaps the engineer was excited because he was not forced to keep the timpani as far back in the orchestral mix as Karajan always required. Otherwise, the sound is balanced and gains an 80% fidelity score when judged in isolation.

In comparison to some other notable recordings, Kleiber comes out on top, but not for lack of competition. Not least of all is the old mono recording from around 1950 made by his father Erich Kleiber, also with the Vienna Philharmonic. Father and son share an incisive approach to this music, but it is the son who comes out just slightly ahead in terms of joyous energy. A towering classic of the early stereo years, also recorded by DG, was the 1963 performance by Herbert von Karajan. Indeed, Karajan pretty much defined the central approach to this work for the second half of the twentieth century. His powerful approach was inspired by Toscanini’s revisionist literalism, but featured Karajan’s own sleek refinement. Whereas Kleiber’s performance is aging gracefully, the Karajan is beginning to look more and more like a relic from a different era. Though impressive in its streamlined power, Karajan’s Fifth seems to have more to do with demonstrating Karajan’s control over the Berlin Philharmonic than it has to do with Beethoven. One finds it hard to connect Karajan’s refined poise with the Beethoven one reads about in biographies and histories. Furthermore, the 1963 recording was originally very bass-shy, and the attempt to boost the bass in the re-mastering process has made the recording somewhat boomy. Karajan’s later remakes are even more plush and refined, moving ever further away from the rambunctious spirit of the composer. The recent recording by Sir Simon Rattle and the Vienna Philharmonic never loses touch with that spirit, though. Indeed, it is one of the highlights of his new complete set of Beethoven symphonies on EMI (soon to come in high-resolution format, I hope). Rattle’s typical didactic manner means that in comparison to Kleiber, his performance may seem fussy and short-winded in phrasing, but Rattle does find many felicitous details along the way to justify his approach. In tempo, Rattle is generally a little faster than Kleiber, yet conversely, his performance sounds slower, due to his heavier touch. Where Kleiber bounces along, shaping the arc of the movement, Rattle jumps into the fray and shapes inner lines and details with strong, decisive gestures. Fortunately, EMI’s recording (also in the Musikvereinsaal) has the extra clarity needed to make Rattle’s approach coherent.

An even clearer recording of recent vintage is the Telarc release from 1998 featuring Benjamin Zander and the Philharmonia Orchestra. Zander’s approach is based on Beethoven’s original metronome marks, so the first movement is wildly fast, knocking off over a minute from Kleiber’s by no means leisurely timing. That headlong tempo causes a little scrambling and instability in the orchestra, but it does grab one’s attention. The finale, again after Beethoven’s metronome, is more spacious and relaxed than usual. Telarc’s sound on that recording is beautifully warm and balanced, but decidedly on the dry side, which some might find a bit inhibiting in this music. But neither Rattle nor Zander ever quite explodes with energy the way Kleiber does. The Zander stands as a more effective “alternative” version of the Fifth than Harnoncourt’s Teldec recording with the Chamber Orchestra of Europe, which breaks down into a series of spiky gestures and sullen retreats, with a misguided decision to slow for the trio of the scherzo, diffusing all the built-up tension.

In Beethoven’s Seventh, Kleiber is not quite as incandescent, though the performance (rated at 90% on our scoring system) is still one of the better ones out there, mainly for its lithe, dancing poise. Also on the plus side is Kleiber’s deployment of the second violins on the left, which clarifies Beethoven’s inner string lines, but for flat-out inspiration, this performance pales when it is measured against the live concert that was videotaped in Amsterdam in 1983, when Kleiber led the Concertgebouw Orchestra in a performance that catches fire in a way this 1976 studio recording never quite does. That live Kleiber concert has shown up on videodisc in the past, so if it gets reissued on DVD, snap it up in order to hear the greatest Beethoven Seventh ever recorded. The present release is also compromised sonically. By the late 1970’s, DG was beginning to explore intensive multi-miking (a fetish that remains to this day), and so we find the same conductor with the same orchestra playing the same composer in the same hall and coming up with a remarkably different sound. The multiple microphones have been moved up close to the various orchestral sections. This results in a more restricted dynamic range, less hall ambiance, and lower recording levels picking up less instrumental timbre. This re-mastering puts a better face on the recording than any of its earlier incarnations, but the flawed original remains the problem. The advantages of this close-up multi-miking are a greater clarity of inner lines, and less clangor in the climaxes, but the surround sound makes less of an ambient impact under these conditions and I awarded a score of only 70% in the fidelity category.

The small print in the program booklet indicates that the master for this SACD originated as PCM. Is it likely that anyone could tell the difference? Perhaps not, especially if the masters were 96kHz or above, but one wonders why, when the master tapes are surely analog given their age, an analog signal path wasn’t retained right up until the final conversion to DSD. Deutsche Grammophon is normally regarded as the premier major classical label, so naturally we expect only the ‘purest’ productions from them.

Performance wise, Rattle’s new VPO recording again takes a very different approach to the work. If Kleiber’s approach endorses Wagner’s famous description of this work as “the apotheosis of the dance”, Rattle’s emphasizes the work’s connections to Beethoven’s other epic pieces, with broader tempos and darker underlining of the passing shadows. Karajan offers Beethoven experienced as a ride in a Porsche. Harnoncourt is more convincing in the Seventh than he was in the Fifth, especially in his poignantly lyrical take on the second movement. The big flaw in Harnoncourt’s recording is in the last movement, where he draws so much attention to the supporting inner voices, the main theme is drowned out in the frantically paced scramble. One other modern recording of the Seventh that must be mentioned is the live Berlin Philharmonic recording (also on DG) by Claudio Abbado. The initial impression is one of over refinement, but the noble poise is atmospheric. As the work builds up, tuttis emerge with real teeth and the rougher side of Beethoven is honored with great vigor. Abbado is alert to every shading of mood, and like Kleiber, uses a light touch, allowing each mercurial mood to rocket off in a new direction. Add to that a great lyricism, and you get the finest modern recording of the work. Setting aside Beethoven’s moderate metronome mark, Abbado kicks off the finale like a bat out of hell, even faster than Harnoncourt, but without losing the main theme. That tempo proves unsupportable, and the movement soon settles into a tempo just a hair slower, but it is a great adrenaline-fueled moment while it lasts. Only Kleiber’s live Concertgebouw Seventh offers similar excitement. 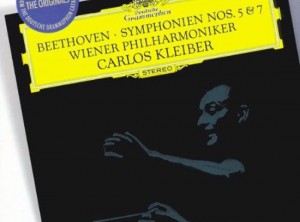