Silverline and 5.1 Entertainment have been releasing music-only titles on DVD-Video with Dolby Digital and/or DTS multi-channel audio for some time. Their catalogue includes selections as diverse as the Big Phat Band’s excellent ‘Swingin for the Fences’, the London Philharmonic playing Beethoven and collections of ‘mood music’ entitled ‘Directions: North’, ‘Directions: South’ and the like.

So it was an obvious progression for 5.1 Entertainment to transfer such titles to DVD-Audio, the multi-channel mixes were ready and waiting.

A rather eclectic collection it is too, there are familiar titles such as ‘Rebel Yell’ by Billy Idol, ‘When the Night Comes’ by Joe Cocker and ‘Centerfold’ by the J. Geils band, through to less mainstream, somewhat aged tracks in the shape of ‘On the Road Again’ by Canned Heat, which I’m not sure I’d even categorise as ‘rock’, surely it’s progressive blues?

Of course the fidelity of the tracks differs somewhat given their varying vintages (the oldest dates from the late ‘60s and the most recent from the mid ‘80s), but all are of a surprisingly high standard, with two or three exceptions. Tape hiss is clearly evident on Sugarloaf’s ‘Green-Eyed Lady’, the scent of mothballs still permeates ‘On the Road Again’ while ‘Time Won’t Let Me’ by the Outsiders suffers most from the march of time.

However, the entire disc is crippled a brace of significant flaws. For some reason, all bass has been pre-filtered away from the five main channels and routed exclusively to the LFE – which is bad enough – but on top of that, the LFE level is exceptionally high leading to what can only be described as a bloated, exaggerated low frequency delivery on most tracks. If you happen to run your LFE subwoofer without a high-cut filter, then watch out, it’ll be called upon to deliver unnaturally high, possibly localisable frequencies, a situation that isn’t ideal by any means.

This major drawback aside, I was moderately impressed by the vocal clarity delivered by a number of selections, especially Idol’s ‘Rebel Yell’ and Pat Benatar’s ‘Heartbreaker’. In fact, the latter opens the fidelity window a little too wide, Benatar’s dubious vocal abilities aren’t worthy of such scrutiny, at least on this track.

On the whole, the disc’s surround mixes have been sensibly produced; there are creative elements, the guitar work of Billy Squier’s ‘Everybody Wants You’ and John Waite’s ‘Change’ for example, but nothing that will detract in an undesirable way.

Even if you don’t yet own a DVD-Audio deck, ‘Classic Rock’ is playable on all DVD-Video machines, not only is there a Dolby Digital soundtrack, but also a DTS alternative (suitable external decoder required).

Unfortunately both Dolby Digital and DTS tracks suffer the same bass routing problem as their DVD-Audio counterpart, but in this case the nod just goes to the DTS version, the over-emphasised low-end is a just tad less ‘boomy’, but it’s a close call. None of the material on this disc poses much of a problem for either of the lossy schemes, let’s face it, 1970’s rock of this ilk is hardly challenging, so both fare remarkably well, even giving the DVD-Audio track a run for its money.

Another point worth noting (due to the strange low frequency routing) is that the disc will pose problems if you decide to listen to a two-channel downmix from the Dolby Digital audio, via headphones or the analogue outputs of a DVD-Video player for example. The LFE channel is discarded when downmixing and therefore there will be a complete loss of bass below ~100Hz. This is why Dolby’s own mixing guidelines suggest that bass does not appear in the LFE channel exclusively, a point lost on the engineers over at Silverline.

Disc extras are few and far between. There is a small selection of static images accompanying each track, a brief explanation of multi-channel music and, perhaps of most use, calibration noise for those who wish to equalise the channel levels of their playback hardware. That’s a good idea since not all processor/receiver 5.1 analogue input arrays maintain consistant gain when compared to conventionally set output levels.

While a number of tracks on this disc have merit, unless you’re an avid fan of one or more of the artists featured, ‘Inside the Music: Classic Rock’ has few redeeming features. It isn’t a DVD-Audio showcase by any stretch of the imagination and what with the strange bass routing, is one to be left on the shelf unless you’re really software-hungry. 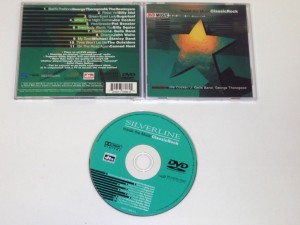