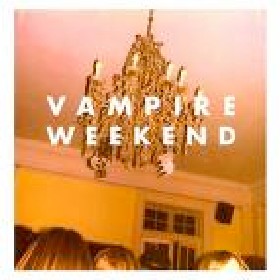 This self-titled first album by Vampire Weekend, released in 2007, has been well-reviewed in the mainstream music press, and continues to gain mixed reviews among listeners. The album is well-crafted pop: No grinding guitars, no muddy vocals, no misogynistic lyrics. These guys are clean-cut Ivy Leaguers, showcasing a somewhat self-conscious intellectual bent…not just in the lyrics (the most likely place to hear it), but also in the arrangements, which make full use of strings, organ, harpsichord and chamberlin (a cousin to the Mellotron). In this regard, they resemble much less an early R.E.M. than they do the Talking Heads. Clever music with clearly understood—though still occasionally head-scratching—lyrics. It works.

The entire first side of this LP is strong, from the peculiar Oxford Comma (superb lyrics) to the catchy A-Punk (the instrument that sounds like pan pipes must be the chamberlin). Cape Cod Kwassa Kwassa (huh?) doesn’t sound like it should work, but indeed it does.

One is reminded throughout the album that this is an album by a group of Columbia undergraduates, and that they are young folk. M79 (the name of the bus route that runs across Manhattan on 79th Street from East End Avenue to West End Avenue), Cape Cod Kwassa Kwassa and, in particular, Campus remind the listener of this.

There are a couple of miscues: I’ve listened to One (Blake’s Got a New Face) many times in an effort to understand it. Finally I gave up: It’s just kind of silly, and the caterwauling chorus detracts from whatever charm may lurk in clean arrangement and the obscure lyrics. I Stand Corrected isn’t silly, but it’s dull.

Walcott, the penultimate song on side 2, is a song that tells a story of sorts. It’s a song about a Vampire Weekend (don’t ask me to go into detail…but the name of the album precedes the band) and it has—if you’ll let me wax a bit poetic—and elegiac aspect to it. To me it is the climax of the album and has more weight than the rest of the songs… odd, because reading the lyrics there is little sense of the dramatic. Credit the vocals and, again, the arrangement.

The observant reader will note that I own the LP of this album, which has also been released in CD format. The LP came with a link to a free download of the album in MP3 format. It would have been nicer if they had included the CD along with the LP, but the vinyl was reasonably cheap, so I’m not aggrieved. I burned the MP3s to a CD and I play it in the car, where its low-fi is not an issue. I have not listened to the “official” CD.

The physical product has its good and bad points. The vinyl looked clean upon removal from the sleeve, but there were a few loud pops throughout. It was otherwise very quiet, and sounded fine. I assume that the music is a digital transfer…the entire project (recording, engineering, mixing) seems to have been handled by the band and their friends and family members, and given this it came out pretty well. Mastering is by Emily Lazar and Joe LaPorta at The Lodge in Greenwich Village.

Packaging is unimpressive. Money was certainly saved on the outer jacket, which looks amateurish (though I really like the photo on the front cover). The back of the outer jacket lists only the songs and the timings…a real opportunity for “advertising” the band was lost here. The LP itself was encased in a cheap paper inner sleeve. Unimpressive. On the other hand, the lyrics insert contains detail on the production of the album.

There has been more than a little hype about this album, so much in fact that it has become polarizing, and folks are, I suspect, making decisions about its worth before they hear it. This is a shame, because it is a strikingly impressive initial effort from this band. The tunes are catchy, the lyrics clever (on the whole) and the arrangements are often gorgeous. Even if you’re not a fan of today’s indie releases, this one is probably worth a listen. You may find, as I did, that you play it more than you expected to, and even whistle a tune from it occasionally.

Crazy Horse At The Fillmore 1970 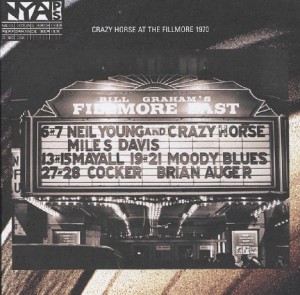 I managed to get through the first twenty or so years of my life knowing little about Neil Young, and barely listening to him as a solo artist at all. Sure, I liked CSNY enough, but tended to fast forward through Young’s songs. This ignorance—blissful or otherwise—lasted until Christmas 1978, when my then-girlfriend gave me the triple vinyl album “Decade”…you know, the one with the gatefold photo of the artist in front of an evil looking clamlike fireplace. A few listens to this album and even some of the more raucous songs began to sound a lot better.

At one level, Neil Young fits into the same category as Bob Dylan to me: Great Songwriters with Bad Voices. This does absolutely nothing to detract from his their respective oeuvres,however…and this recent release from Classic Records is a solid testament to this. This LP is issue #2 in the Neil Young Archives Performance Series (has anyone ever seen issue #1, by the way?), and consists of songs selected from a two night run at the late great Fillmore East in 1970. Some have noted that this LP contains only the electric set (including Crazy Horse), and that a solo acoustic set exists as well; regardless, this LP is electric only.

On this album, Young is accompanied by Crazy Horse: Danny Whitten on guitar, Ralph Molina on drums, Billy Talbot on bass and Jack Nitscke on electric piano. This set is electric, and boy, does it ever rock…though not frenetically. There are only six tracks on this album, which starts off with a relatively relaxed “Everybody Knows This is Nowhere”, the title track from what was then his recently-released album. The performance is superb: OK, the nasal vocals are nothing to write home about but the instrumentation is superb, particularly the guitar/bass interplay. The quality is maintained through out the rest of the album, which includes Winterlong, a particularly driving version (is there any other kind?) of Down by the River, Wonderin’, Crazy Horse’s Come on Baby Let’s Go to Town, and the climax of the album: The 16 minute long version of Cowgirl in the Sand with its extended jam. There is apparently some controversy over Cinnamon Girl not being included on this album…it’s on some bootlegs, and would have been a nice addition here.

A consistency of performance extends to the entire album. Folks, if you are a fan of the electric guitar, well manipulated, you should not miss this LP. There are concert albums that so lack energy that you might be forgiven for thinking that they were recorded in a studio: This is not one of them. There is a sense of immediacy in the performance that is enormously attractive. A particularly nice touch is at the end of the album: As the band has left the stage, the PA system begins playing “Sweet Baby James”, which would have just been released a few weeks before the concert. Nice. I was not quite 11 years old when this concert occurred, but 38 years later I sure wish that I had been able to attend.

While the feel of the album is faithful to the feeling of a live performance, I am happy to report that the sound quality is closer to that of a studio performance. Having just listened to another band’s more or less contemporaneous live concert recording (wherein the vocalists generally sounded like they were singing from the bottom of a barrel), this Chris Bellman-mastered LP distinguishes itself by its clearly-rendered vocals, tight bass without muddiness, and the clear rendition of individual instruments throughout. It’s a testament to the recording that even on my tertiary system (I’m at
the summer house for the season, and my reference system is just too big and heavy to bother transporting it) it sounds great.

I have had consistently positive experiences with Classic Records releases over the past three or four years, and the 200g pressing of this album is no exception: It is dead quiet with superb dynamics. I’ve been doing a lot of listening to 45 rpm albums of late, but this LP gives 33s a good name. The vinyl is dead centered and is warp-free. The packaging of this LP lives up to that of others that Classic has released: The gatefold jacket—packaged inside a resealable Mylar envelope—is printed in predominately black and white, and features a matte finish. A sheet including detailed production credits is included in the sleeve…a nice touch. My other Classic LPs have come supplied with plastic-lined paper innersleeves, but this album has a Japanese-style rounded side plastic envelope only…not my preference, but it works. Finally, the labels on the vinyl itself are black, with tiny black and white printing…a nice visual touch, and it looks great on my Thorens, with it’s black top plate and tonearm.

Even if you aren’t a major Neil Young fan, you may well want to consider picking up a copy of this LP. The performance is so solid, and the sound quality is so good, that it just may make a fan out of you. If you are a fan already, then you should consider this album essential.