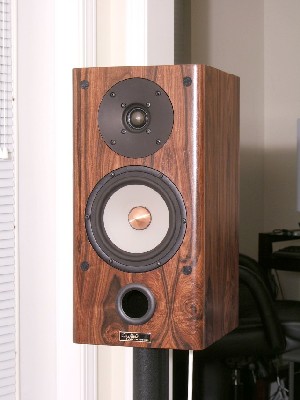 If you want to know the build quality of an automobile, you don’t kick the tires, as the old adage suggests. Instead, you look under the hood. The same is true in audio – great sound begins with great parts. Sure, a Rolls Royce and a Hyundai both serve the same purpose, but if you want to ride in style, you’ll probably choose the better-built vehicle.

My primary purchase goal for my most recent acquisition was to find a pair of speakers with the highest quality in my price range (less than $1,000 used). I began by conducting extensive research on the innards of high-end gear, then I searched for smaller speaker manufacturers who used the same parts. Finally, I read all of the reviews I could find and eventually narrowed my list down to Tyler Acoustics in Owensboro, Kentucky. The owner, Ty Lashbrook, provides excellent customer service and promptly returned all of my e-mails.

I was interested in the Tyler Acoustics Reference Monitors because I wanted to acquire highly regarded speakers built with the highest quality parts at an “affordable” price. The Taylos fit this description, so I finally took the plunge and bought a used pair. I did not audition them first. What sold me on the speakers were the professional reviews, consumer reviews, price, aesthetics, customer service, and build quality.

Let’s begin our discussion with aesthetics. It’s a big and beautiful speaker; each one is 9” x 10.5” x 18” and weighs a hefty 32 pounds. Factory direct price is $1,825/pair. My current pair is premium rosewood (see picture). Upon closer inspection, the smartly hand finished real wood veneer is quite evident. I personally like the tiny imperfections in the wood grain.

The speakers do not come with holes for attaching the grilles. What’s odd, though, is if I decide to use the grilles, I’d have to attach them to the baffle via peel & stick Velcro pieces. This is aspect of the speaker detracts from its quality, but it is inconsequential because most people would prefer to go grilleless and show off the Seas Millennium driver with its pure copper phase plug. Sweet!

Once you look under the hood you’ll find a 1″ Scanspeak Revelator 9900 tweeter and a 7″ Seas magnesium woofer in a 1″ thick, front-ported cabinet. If purchased by itself, the tweeter costs $208 each and the woofer costs about $167 each. The Taylos also use Hovland “Musicap”capacitors and Goertz Alpha-core inductors in the critical signal paths. DH Labs internal wire and Cardas solder is also standard. The dual binding posts are typical for its price range.

In addition, there’s a small toggle switch on the back of each speaker that is not in the signal path. The switch in the up position is the normal position. The down position engages a filter that takes the 600-1200hz range down about 3 db. This supposedly works well at louder volumes. I haven’t experimented with the switch, it’s left in the normal position. 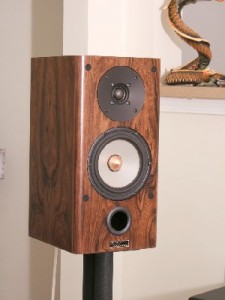 My reference CDs include Dianne Reeves’ Quiet After the Storm, Paula West’s Temptation, and pianist Gene Harris’ The Best of the Concord Years. On Ms. Reeves’ track, “In A Sentimental Mood,” the music is so magical that your imagination can transport you to a quaint jazz café, and while sipping on a glass of chardonnay, you are mesmerized by this amazing rendition. Similarly, the Taylos allow Paula’s perfect pitch to sound positively angelic on “Don’t Explain.” You can hear every nuance of her voice, even the slightest whisper of a breath she takes before she holds each long and glorious note.

The biggest surprise was when I played Gene Harris. It didn’t sound like my audio system was trying to duplicate the sound of a piano. On the contrary the piano appeared as though it was being played right in my listening room! At that moment, I knew I had something special. Even the applause of the live tracks was uncanny in its realism. I’d say the most important aspect of the Taylos is clarity. The instruments are more realistic, most notably the cymbals and piano. The cymbals simply sizzle. And if a triangle is struck, it sounds like someone actually struck it from inside the room. On the upright bass, you can hear every pluck as though you were playing the instrument yourself.

The clarity is more evident on some CDs than others, and even on some songs on the same CD and not others. Because the music is cleaner, I can pick out all of the instruments. While listening, I find myself identifying specific instruments, whereas in the past I didn’t bother to notice. This is particularly evident with string bass instruments which often get lost behind the vocals, pianos and drums.

The Taylos are somewhat laid back and they throw a huge soundstage with pinpoint imaging. The vocals are slightly recessed, but very natural. The specs indicate that the Taylos dig down to 44 Hz, but they sound like they go deeper than that. Below around 44 Hz, though the bass drops off precipitously. Initially, I used a subwoofer, but soon realized it wasn’t necessary. In fact, the bass on the Taylos sounds just as good as the sub I used to own (Onix Rocket UFW-10), except at the lowest registers. However, if you play bass heavy music you’ll certainly need to add a subwoofer.

Highs are totally non-fatiguing. To illustrate, I put on Anita Baker’s latest CD because it is poorly mastered and extremely bright, so much so that I couldn’t listen to it. I don’t know how they did it, but the Taylos scrubbed off most of the brightness and made listening to this CD quite pleasurable.

Frankly, it took a little bit of adjusting to the Taylos initially because they changed my reference for what good speakers ought to sound like. Music is extremely realistic and detailed. It’s quite evident with piano solos. In fact, some songs sound entirely different. I noticed, however, that a couple of songs actually sound worse than they did before. Apparently, the speakers must be more revealing with some of my less than stellar recordings. By the way, the Taylos like to be fed a generous portion of power, despite their sensitivity rating of 88 dB.

My overall impression of the Taylos is that I felt I had gone from catfish to caviar. The Taylos are a major improvement over speakers I have used in the past. The quintessence of the Taylos is proper tone; they simply provide more realism to the music. The greater the realism, the greater the enjoyment, and I’m really digging these Taylos.

For the price/performance ratio, you have to put the Taylos at the top of the heap. As a matter of fact, for what I paid on the used market, it would have cost me more money to build these speakers from scratch (sans cabinets). That’s value, my friends. Plus, customer service is exemplary. What else can you ask for?

My plan was to buy a superb sounding, high quality set of speakers that would be tough to justify a future upgrade. With the purchase of the Taylos, I believe I achieved that goal. For this reason, I bestow upon them my highest recommendation.