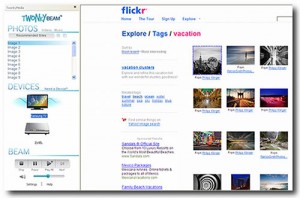 I know talking about something with a name like TwonkyBeam is sure to draw some eyebrows, but this really is an awesome idea.  Basically, someone finally realized that the Internet is jam packed with awesome entertainment options of every stripe and description.  But it’s not exactly easy to move them around,and this is where TwonkyBeam comes in.

There’s a video to demonstrate how it works below, but it’s a plug-in for Internet Explorer 6.0 and up (there’s no need to rush the stage and lynch me yet–rest assured that support is in the works for both Mac and FIrefox) that will let you pull media from any website with photo, music or video and send it directly, whole and breathing, to a DLNA / UPnP compatible device.

Just in case that technobabble got you a bit confused too, here’s a good example–with TwonkyBeam, you can send photos from Flickr directly to a digital picture frame.