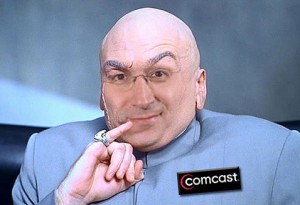 All right, folks, two nifty points to bear in mind about the all too possible takeover of NBC by Comcast:

1. Hulu will not be summarily executed.

Most people were fearing one or both of those two would result from a Comcast takeover of NBC, and frankly, either of these would have made sense.  Network TV is suffering badly due to slumping advertising revenues–NBC not least among them–and Hulu posed a serious threat to Comcast’s operations on two fronts.

But what may answer the question is the knowledge that Comcast has a contract with Hulu, or rather, Hulu’s subsidiary Fancast.  That’d explain that much clearly…but why no spinoff of NBC?  That we don’t know…at least, not yet.