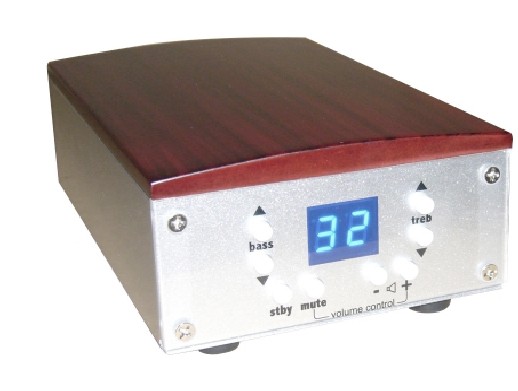 Class D amplification has, in all honesty, a love/hate relationship in the audio community. On one hand, it is admired for what it can do with subwoofers, and in spaces where room is at a premium, i.e. the office. At the same time it is ripped by those who feel that power from a silicon chip has all the subtlety of a redneck neighbor. I’ll be the first to admit, that I don’t have a preference either way, I just want to hear the best sound possible for the dollars that have been exchanged. A month ago, I was presented with one of the more unique-looking integrated amps on the market, the Gizmo V1.0M. The amp is collaboration between Craig Chase and designer Doug Goldberg. It is the first product for Craig’s new company, Tweak City Audio. Some of you may recognize the screen moniker “Craigsub” on various forums, yes, it’s the same guy. Long time readers of A$$A may remember Craig as the guest writer and host of the blind speaker shootout printed some two years ago in the October issue.

The whole idea of Class D amplification is somewhat misunderstood. As an engineer, I appreciate its goal of providing a cooler, less power hungry, and simpler way of providing amplification. A one sentence explanation is that the chips switch between an “on” and “off” position constantly. If you want a detailed explanation I suggest reading this link. The key thing is that for budget amplification, class D offers tremendous advantages and may just become the defacto standard design.

The Gizmo V1.0M is about the size of two VHS tapes stacked one on top of the other. The power supply is located in a separate “brick”. The case is made of a brushed aluminum with a slightly curved rosewood cap. The front face, though small in area and containing up and down buttons for Bass, Treble, Volume, and single buttons for the Mute and Standby, along with the digital display still manages a rather uncluttered look. The blue LED display is clear but not overly bright. The back panel consists of right and left RCA inputs, a Sub Out RCA, 2 pairs of long and much appreciated speaker binding posts, and the power receptacle.

The Sub Out deserves special kudos. It is designed to relieve the amplifier of deep bass when a subwoofer is present, via the set cutoff frequency point of 100hz. For most speakers using the Gizmo 1.0, this fits in quite well with the sound output. Without a subwoofer, the design gives a slight 2-3db push at 48hz. This worked quite nicely in combination with the AV123 x-statik speakers I have in for review.

In addition to the x-statik speakers, I connected my Cambridge Audio 540v2 cd player to the Gizmo. The visual cue is a bit disconcerting; a full-size cd player and floor-standing speakers being controlled by a ridiculously diminutive box. The x-statik speakers though large, are quite efficient at 90db making for an easy drive for the Gizmo. Bass response was plentiful, but not abusive. Mid bass and midrange is rather easy-going across both male and female vocals, though I felt a bit thin sounding at times. Nora Jones’ vocals lacked a bit of smoothness that I’m used to hearing from a Cambridge 640v2 integrated amp I’ve been borrowing from a friend.

I found the Gizmo sounded better with more laid-back, European speakers. The same friend also loaned me an extra pair of B&W 602 monitors. I found this combination offers a more “natural” and fluid performance, especially with the higher frequencies. Cymbals and the piano work of George Winston lacked the harsh edge that occasionally appeared when I hooked up the x-statiks. I’d speculate that the natural European speaker philosophy of a more subtle treble (think of dealing with the plaster walls, tile and wood floors) makes the critics of class D amplification more muted in the old world. 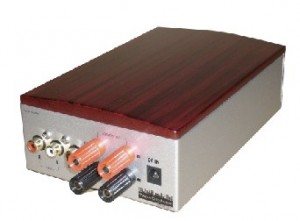 The big picture to understand is that the Gizmo 1.0M isn’t designed to be a serious audio fan’s main rig. More likely, the amplifier for a secondary system, or computer rig. For a college dorm the Gizmo makes perfect sense. With that in mind, I hooked it up to my laptop, and later my iPod in my home office along with the B&W monitors. In this small space and setup, the Gizmo came into its own. Screw the silly computer speaker/subwoofer system, now I was hearing music without the exaggeration and limitation. I even cranked up the volume into the mid 90 db’s on a couple of occasions while the neighbors were at work. The results were a cleaner sound than I had anticipated, though the thinness previously described still could be heard. To get past that limitation I hooked up a subwoofer using the Sub Out jack, and quickly dismissed all but 10% of the issue. The added bass response kicked in richness in the tertiary harmonics.

There is an old phrase “fun is fun”, and that is the Gizmo 1.0M in a nutshell. It’s a budget piece of gear that offers excitement in its performance. Its minimal footprint makes it ideal for those with a computer office environment. I must admit that I would enjoy seeing a 3.1 and 5.1 home theater versions on the market. So many people I know just don’t have room for a full size HT amplifier, yet an HT Gizmo could easily fit next to a DVD player.

The final word on the Gizmo 1.0M; it’s the type of unit that can bring in many young iPod/MP3 users into the traditional speaker world. It’s time for the stereo-happy dad’s of the world to help their kids make the connection.