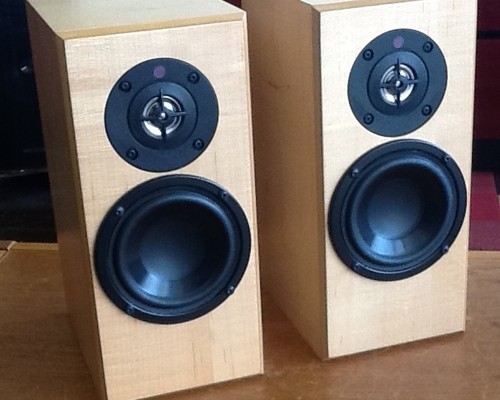 Discovering audio in the 1970’s meant that when it came to speakers, bigger was always better. Sure, one heard rumors of a mightymite speaker from Europe (Rogers LS3/5A) that was supposed to be amazing, but the opportunity to actually hear it was non-existent. The bigger the woofer, the better was almost the only thing anyone wanted to know.

Well, as Bob Dylan sings, “The times, they are a changing”, smaller, faster drivers are now the rage, backed up by endless computer generated graphs. One of the best examples of room filling sound from just a pair of wine bottle-size boxes is the Totem Acoustic Dreamcatchers.

I first heard the Dreamcatcher speakers this past summer, but my attention at that time was on their big brother, the Rainmakers. Very recently, I noticed on the website for Portland, Oregon’s Echo Audio that a used pair was available. A quick email to the owner, , and I was all set to pick them up for an in-home audition. When I arrived, I asked if they could be hooked up for a quick listen, just to make sure I wasn’t crazy. Although Totem says 100 watts max, the speakers were connected to a DK Audio Design VS.1 Reference MkII, 150w Integrated amplifier. Once the music began, I was startled by what was coming out of such a small pair of boxes. As a comparison, I had the salesman switch over to a quality brand bookshelf, the change was amazing, the Dream catchers just blew the bigger, more expensive bookshelf away. I just knew I had to get these little monsters home and see what they could do with both a simple Adcom GFA-535 amplifier (60 wpc) and when powered by a Harman Kardon AVR75 receiver (75 wpc).

The pair I tested came in a wonderful burgundy mahogany veneer. The fit and finish was impeccable. Normally, I am not a fan of this finish, but in this case it works very well. On the back is the standard bi-wireable terminal setup. A small rear firing port sits opposite the tweeter. I tested the Dreamcatchers without the grills and found that dust, etc. weren’t attracted to the cones at all. 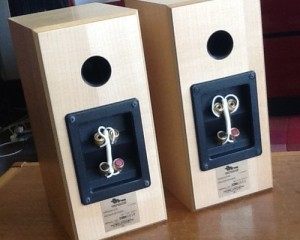 I first set up the Dreamcatcher’s in my living room (21 x 12), on 24 inch metal stands, approximately 12 inches from the back wall and 30 inches from a side wall. Being Christmastime, I played a random selection of seasonal music while I went about setting up the yuletide tree. My first impression while moving about was how well they sounded off axis. There was only the slightest hint of being off the sweet spot. Instrument placement could still be located even when standing way off to one side or another. I was particularly impressed by the how the Dreamcatcher’s handled creating the soundstage once the tree was placed between the speakers. For lack of a better description, the sound flowed around the obstacle like a stream around a boulder. 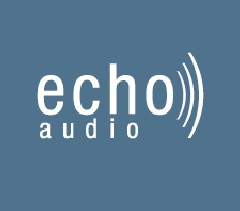 My second session occurred in my family room, a 12 x 12 room. The speakers were placed on a low bookcase shelf (15 inches from the ground) on either side of the entertainment center. This time I used my HK AVR75 to power the Totems. I then popped in my demo cd. The first song is John Mellencamp’s “Justice and Independence” with its energetic drum solo. What I heard was amazing, the room became the stage! Musicians were all around me. 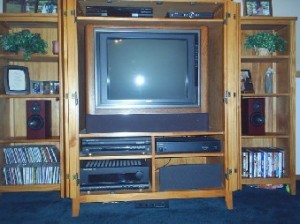 The drums were right off my feet as I sat in my recliner. The bass was a bit more pronounced and deeper, but not tiresome (bass fatigue is a pet peeve of mine). The Dreamcatchers used the natural acoustics of the bookcase to accentuate the sound.
The deliciously clear voice of Phoebe Snow in “Something Real” with her abrupt cut offs brought me forward in my chair. During Dire Straits “Making Movies”, the cymbal crashes shimmered even standing up, demonstrating once again the outstanding dispersion capability. Equally fun during that song was hearing the combination of bass guitar and bass drum thumping the room.

A favorite musical test of mine for speakers is seeing how well they handle the deep bass vocal of Crash Test Dummies, in a live recording of “Superman’s Song”. Many bookshelf speakers struggle to handle the deep intonations of Brad Roberts vocals. The Dreamcatchers performed flawlessly. Another test is the drum roll from one speaker to another while Dan Fogelberg’s voice stays front center in “Higher Ground”. Once again, the Dreamcatcher’s passed with flying colors. As a Fogelberg fan, I was also pleased how these gems didn’t exaggerate the sometimes raspy/ breathy nature of his voice. 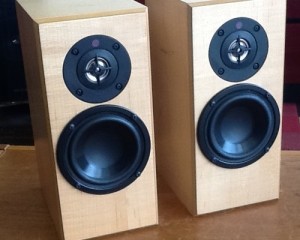 In the third & fourth listening sessions I finally detected a crack in the Dreamcatcher’s armor. The French horns from John Williams underated score “Dances with Wolves” lacked a bit of their pronounced emphasis. This I caught wind of during the third session in the family room, and was more pronounced in the living room with its larger, non-bookcase setting.
Interestingly enough, later in that same piece the trumpets come through strongly, as they should. This could be a case of a specific sound not being able to accurately reproduce due to cabinet size. Whatever the case may be, it is a minor, minor issue.

Vince Bruzzese, has done audio a great service in creating a truly affordable speaker capable of quality, room filling sound, to those who desire very small footprints. If you are looking for a speaker can perform at audiophile level and truly fit on a normal bookcase, then the Totem Dreamcatcher should rank at the top of your list of speakers to audition.