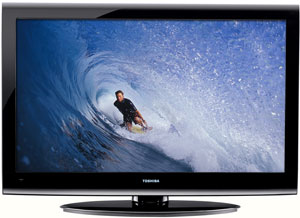 Time for a good long look at some old and dear friends, folks–in the rush to new technology like the LED television and 3D hardware, we forget about the LCD television market. And there are still some fine examples of LCD television technology out there, like the Toshiba 40G300U.

The Toshiba 40G300U is a forty inch 1080p LED television that offers a 120 Hz refresh rate to reduce blurring, the DynaLight Backlight Control system to automatically adjust the level of backlighting based on the brightness of a video frame for optimal brightness every time, Photo Frame capability (which lets you use this one like a huge digital photo frame, the kind of thing you’d find over at our sister site, Image Acquire), a gaming mode to further improve blurring in the kind of high-speed setting you’d get in a video game, four HDMI ports, a component input, two composite inputs, a PC input, an optical digital audio output, a USB port and an ethernet jack.

I’m impressed by this one. The image quality is surprisingly nice given that it’s somewhat old technology, the sound quality is actually pretty impressive for regular television speakers, there are more than enough ports in every direction and, while this one doesn’t seem to handle streaming on its own, it’s got an ethernet jack, a PC input, and more than enough slots for a Boxee Box or the like.

Now here’s where it gets really good. You can pick one of these up at Amazon for six hundred thirty nine bucks. That’s a quarter off retail, and for a television packing this kind of power that’s not half bad. That’s a lot less than half bad, really.

The Toshiba 40G300U will give you plenty of options and easily handle most of your needs, so if you’re looking for a small big screen that won’t break the bank yet still provide plenty of value, this is a great place to start your search.