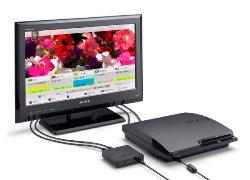 The PS3 can do some pretty cool stuff with playing Blu-rays and all, but if it could record and process high-definition high definition video, wouldn’t that be better?

Fortunately, this is what the Torne, a DTV adapter from Japan is designed to do. Yes, it can record television and even video playback while surfing the web. You should be able to get it in March for about $110, or in a PS3 bundle for $465. I’m not certain you can get it if you are not in Japan, though.