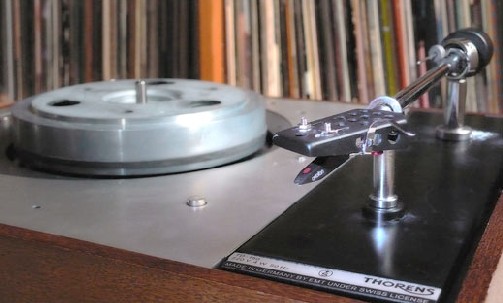 It’s been an interesting week or so in this Viennese household. No sooner had I laid claim to our sitting room by placing the latest hi-fi project on and around the coffee table, than my wife had decided that now was the time to do the family accounts. She carefully, and precisely, dropped mountains of receipts and assorted invoices around said table, including those sacred places in front of the loudspeakers and by the equipment rack, and in addition took over vast areas of floor in our somewhat cramped home. It was time to give up. When the small Norwegian speaks, this Brit has no choice but to listen. Accounts it was, and the playing of music had to take place during the odd moment when the rustling of paper could not be heard, or when the Viking queen had taken leave of her apartment kingdom. Which is a shame, because this particular hi-fi project had just begun to sing when the paper hit the floor. And, what’s more, it’s her record player we’re talking about.

We picked up our Thorens TD150 at a hi-fi jumble about five years ago for about $60, and it had then been lent to a friend while we pontificated on where we should live. After we moved to Vienna it remained in London until only a few months ago, and now it’s with us at last, and ready to become a workhorse. 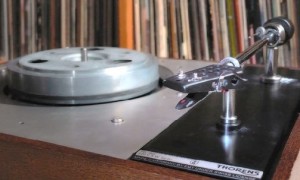 The TD150 was first produced about 40 years ago, and some people believe it’s the forerunner of the Linn LP12. Whatever the truth is, and the truth is out there somewhere, it’s lost in the mists of time, but the little Thorens is certainly of the same school, a deck suspended by three springs, and with a separate arm board that can be cut to fit most 9 inch arms. There’s a school of thought that some arms, such as all Regas, are too heavy, but many use an RB250 or RB300 and swear by the combination.

Over the years I’ve collected a few odds and ends that I hoped might help the 150 come to life. The mat is not one of audio’s great designs, and I procured a nice, heavy rubber replacement for only a few pounds. I also bought Linn springs to replace the Thorens originals, a new belt, and finally a Sugden SAU2 tonearm that caught my eye on eBay one day. The Sugden is about the same age as the deck, and is a whole lot more affordable than an SME 3009, which for some, including my brother-in-law, is the natural partner for a Thorens.

The TD150 is a neat little machine. It takes up a small amount of space and, to my eyes at least, just looks right. Some believers say that you should replace the plinth with a much heavier, much bigger design, but I think that misses the point. This turntable, whilst capable of fine sound, is not trying to be a world-beater. It’s simply something that, with a little care and attention, makes you want to spin LP’s for entire evenings. Ours is a Mark I, which comes with the rather poor TP13 arm, but the Mark II is equipped with one of Thorens better efforts, the TP13A. If you simply want to buy a deck and play music, then go for this model. But if you want to have fun tweaking…

My first job was to remove the Thorens arm, which was attached by an interesting arrangement of thin wires that require a degree in some science or other to untangle. I then, with the use of drill, filler and some measurements found on the net, fitted the Sugden. It’s actually an 8-inch arm, and unfortunately came with a lift mechanism which I was completely unable to fathom. One day, perhaps, I’ll unravel its complexities. It can also, and this is unusual in an inexpensive arm, have it’s height adjusted, although it is a little fiddly to achieve perfection, if such a thing exists. Finally, I fitted an Ortofon OM5E I had sitting around, switched on the amp, and gently turned up the volume. I heard an array of hums and crackles that suggested I’d need to earth the arm in about 15 places, or risk blowing the speakers into orbit. Actually, putting the arm’s earth wire deep into the chassis earth point did the trick. Mostly. There’s still a gentle residual hum, but I’m confident that can be dealt with, and at normal listening levels it can’t be heard. Then, without doing much in the way of levelling the springs, I played a record.

The resulting sound that escaped from my other ongoing project, vintage Grundig Audiorama speakers, was more than surprising; it was a delight. Yes, the giveaway cartridge is a little harsh at times, and when compared to my Rega 25 there’s a little less detail and information, but it was entirely musical. Instead of fussing over the suspension, or grabbing a mini screwdriver and changing to a better cartridge, I sat and played records. Funnily enough, I think that’s what this hobby is supposed to be about, but I for one tend to forget that part of the deal. 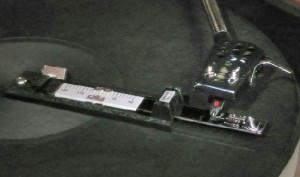 Now, at this point, I was supposed to grab the bits and bobs I’d assembled, take the deck apart, and find out how good it really was. Of course, the best laid plans of mice and men are at the whims and mercies of a difficult world. Work, and the need to pay bills re-discovered by my significant other, left me with little time for play. Instead all I’ve been able to do is snatch the odd hour listening to various albums, leaving me with but a few observations.

The Ortofon cartridge is a genuine bargain, especially when you consider that it’s easily upgraded by changing the stylus to a 10, 20 or 30. It’s easy to see why Rega fitted the 5E as a starter on the new P1 deck. It has relatively few major faults, tracks pretty well, and is easy to line-up. The Sugden arm, despite giving the impression that it might just fall to pieces, or simply disintegrate halfway through the first record it faces, especially the very detachable headshell, is a hidden gem. I bought mine for about $40, and it came with a Connoisseur BD2 turntable. If you haven’t fitted an arm before, try one. It’s not state of the art, but it plays music in an easy, relaxed way. Do, however, buy a Shure stylus force gauge. I received mine a week or two ago, it cost all of $10 new, and makes getting the tracking weight just right, a cinch.

At this point, a warning. The more I listen to LPs, the more I realize how important turntable supports are. My equipment rack is spiked using Super spikes to our suspended, wooden floor. The Thorens hates it, and the slightest foot movement is likely to give the cartridge a bad case of the jitters. These decks definitely require a wall shelf to give of their best, and this is something I’ll be investigating in the very near future.

The more I search the web, the more I realize the number and variety of wondrous machines available out there for the playing of slabs of vinyl, each seemingly with it’s own determined fan base. Sadly, the prices of some models, such as Garrard 301s and Thorens TD124s, have risen to ridiculous levels, but old Lencos, Duals and Connoisseurs are still available for little more than pocket money. Give them a little love and attention and they’ll repay you with great music, classic looks, and just a little aggravation. I think the Thorens TD150 is a marvellous little machine. Grab one while you can!

from aﬀordableaudio,  By Kevin Brock