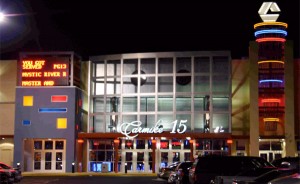 It’s like I always said, folks, the movie theater industry is going to get its clock cleaned by home theater, and be doomed to destruction and obscurity unless it makes pretty substantial sweeping changes.  Indeed, that’s exactly what they seem to be doing–making sweeping changes.

It’ll remain to be seen whether these changes are for the better, but there are some really sweet alternatives in case you’ve had enough of your couch for one night and feel like venturing out.  Consider, if you will, one of the newest Carmike Cinemas movie theaters in Chattanooga, Tennessee.

It’s a twelve screen multiplex with room for twenty five hundred, as well as “plush lounge chairs, gourmet appetizers, and VIP seating”.  All of these sounds pretty awesome, frankly, but that’s not where the interesting parts end, but merely begin.  This theater is going for LEED certification.

LEED, in case you, like me, didn’t already know, is a certification that proves that a building was constructed according to the absolute highest standards in green manufacture.  So basically, if the building gets its LEED certification, it will be big, plush, and ecologically responsible.

Those are words you seldom hear in the same sentence unless the word “not” is involved, but for this theater, it may well be one of the first.