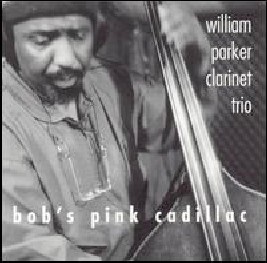 Bob’s Pink Cadillac, credited to the “William Parker Clarinet Trio”, features sidemen not normally associated with Parker’s music: drummer Walter Perkins (who passed away in 2004), best known for his recordings in the ‘60s with Ahmad Jamal, Gene Ammons, Carmen McRae, Roland Kirk, Charles Mingus and others; and Perry Robinson, who has striven his entire 40+ year-long career to bring the clarinet into wider acceptance in avantgarde jazz circles. According to the liner notes, Parker has played with both of these gentlemen in live settings periodically over the past 20 years or so, but this is the first recording they’ve made together.

While Bob’s Pink Cadillac certainly has no shortage of free-blowing jams, on the whole it is quite a swinging affair. A two-disc set, Disc 1 is a studio date recorded in January of 2001, and Disc 2 is a live concert recorded at the famed Lower East Side avant-garde venue, Tonic, around eight months later. The studio session features four tunes, the very shortest of which (“Overcoat in the River”) clocks in at over ten minutes in length. When melodies crop up (which they do in spades on the title track and “Blue Flower”) they are deeply rooted in the blues, accessible, and a ton of fun. “Fence in the Snow” is a notable exception: a fine abstract workout, but taken on its own terms it falls on it’s face near the end of it’s 28 minutes, with each musician performing bizarre vocalizations and sounding like crying babies. The piece is redeemed, however, by the concept behind it, which Parker explains thoroughly in the album’s liner notes. The live disc is a single, continuous performance, nearly an hour long, divided into 5 tracks entitled “Ebony Fantasy” parts I through V. A number of the themes presented on Disc 1 turn up in “Ebony Fantasy”, welcome reference points in the vast sonic landscape that make up the piece.

Although Parker’s hummable melodies would put a smile on any jazz-lover’s face, it’s the performances that make this album shine. Parker swings mightily throughout, perhaps largely due to the presence of Perkins, whose flexible rhythmic sense is unbound by labels like swing, bop, or free…he does it all, changing styles with deft intuition of all that is going on around him. Despite the power and ebullience of the rhythm section, it is Robinson (to whom I have no relation) who steals the show (it is the Clarinet trio, after all!). Parker’s open-ended compositions are the perfect vehicle for Robinson’s tireless inventiveness: he stretches, probes, turn them inside out, and come at them from all angles in an effort to squeeze every ounce of musical possibility out of the material. His melodic vocabulary seems limitless, and can color any note from an encyclopedic timbral palette. This is a unique recording for Parker, but overall a great one for those who like adventurous music they can still tap their toes to.

A word about the recording quality here: I do a lot of listening on headphones, and really didn’t like the sound of this album when I first heard it. It has something of an antiseptic sound to it…like being in a bright, fluorescentlit room, to use a lighting analogy. Turns out it is just too much for the hyper-detailed world of headphone listening…I recently discovered that it sounds fantastic on a decent 2-channel system. Something about the spaciousness of speakers really brings this recording to life… the woodiness in the drums, bass, and clarinet reed warm up, and even the live disc displays excellent imaging.

This was the first recording of Parker’s current touring quartet, which includes Parker’s longtime collaborator Hamid Drake on drums, and the estimable duo of Rob Brown on alto saxophone and Lewis Barnes on trumpet. Brown and Barnes are veterans of Parker’s groups as well, having both appeared on his 1993 Black Saint release, In Order to Survive and several others since.

Amazing things happen when jazz groups stay together for a long time. The performance here is pure magic: Parker & Drake groove relentlessly, and Brown & Barnes telepathic collective improvisations seem to orbit each composition, and while they fly pretty far from the epicenter at times, they never completely lose their grip and shoot unhinged off into space. This isn’t just four great players, it’s four great listeners. Drake may be the best…cat’s got some big ears, his ability to respond to everyone in the group at the same time — while staying locked in to the melody — may be the gravity that holds the whole operation together. 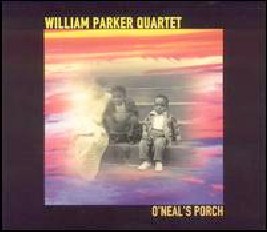 In contrast to Bob’s Pink Cadillac’s emphasis on extended jams, O’Neal’s Porch is all about songs…and what songs they are. The set opens with the bracing, Latin-tinged “Purple”, and is followed by “Sun”— the closest thing to spy movie music I’ve ever heard from Parker (maybe because one part of the melody seems to quote the James Bond theme). Be that as it may, I love spy movie music, and this piece has all the urgency and finger-snapping swing of the best of them.

According to the liner notes, O’Neal was Parker’s uncle. If the loping, happy melody of the album’s title track is any indication, his porch must have been one sweet place to hang out. It certainly inspired Rob Brown, who lays down one of the most exciting recorded solos of his career. That he could play with such abandon but remain connected (albeit distantly) to the song is one of the many examples of the unique musicianship contained on this recording.

The album isn’t all scorching heat…“Song for Jesus” has something of a meditative vibe to it, and is reprised two tracks later with the peppier “Song for Jesus 3/4”. These two frame “Leaf”, one of the looser tracks on the date, but kept grounded bay Parker’s rock-steady bass work. The upbeat “Moon” closes the set on a refreshing note.

Sadly, at the time of this writing only 6000 copies of this disc exist (O’Neal’s Porch is in it’s 3rd pressing of 3000 discs, the 2nd pressing was 2000 units, and the initial release was 1000), an absolute crime against art if I’ve ever heard of one. This album is a classic of the same magnitude as Mingus Ah Hum or A Love Supreme, but it has been heard by a disproportionately small audience because Parker has been labeled “avant garde boogeyman” by the industry…disappointing, because this is exactly the kind of record that can help people overcome their fear of ground-breaking music.