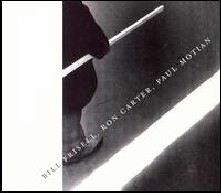 Frequent readers of this column (and there may be 3 or 4 of you out there by now) have probably noticed something missing from my reviews: coverage of new releases. Not that I have any problem with new records, it’s just that there’s so much great material out there that was recorded before 2006 I haven’t felt any urgency to filter through more recent catalogs in search of the gems.

Sometimes life has a way of hitting you on the side of the head, and this September did that to me, with two albums hitting store shelves that were simply begging for my (and consequently, your) attention. If you were looking forward to the second part of my series on William Parker (and there may be 1 or 2 of you out there) have no fear! We’ll get back to Parker in November.

Many fans of Bill Frisell’s late ’80s/early ’90s recordings have been looking forward to the day he would start making jazz records again. He’s explored a number of genres since 1997’s Nashville: country, rock, folk, world music, funk…but many longtime fans have yearned for more of the scratchy, skronky avant-jazz we’d fallen in love with years earlier. Hopes were raised for 2001’s outing with Dave Holland & Elvin Jones, but the folksy release turned out to be something of a disappointment for hardcore jazz fans.

Frisell broke his “jazz fast” last year with the release of East/West (reviewed in June), a pair of concerts recorded in 2003 and 2004 on opposite coasts (hence the name) that demonstrated that he’d never really stopped playing jazz, it was always there in his live performances and abundant sideman work. I wouldn’t expend much breath making the case that his late ’90s/early ’00 oeuvre wasn’t jazz, especially considering how loosely defined the term is these days, but no one will belabor the point with this new release: it is unquestionably a jazz album. While the scratchy/skronky aspects of his early style are laid aside in favor of cleaner guitar tones, this is still a jazz album that only Frisell would make.

Consider the sidemen: bassist Ron Carter is possibly the most frequently recorded jazz musician alive, and Frisell has been a fan for years (even naming a song after him on 2001’s Blues Dream). Frisell appeared on Carter’s 1999 release, Orfeu, and with all the session work these two get, I’d be surprised if they haven’t played together somewhere else before. Drummer Paul Motian has appeared on a number of classic recordings by Bill Evans, Keith Jarrett, Charlie Haden and others, including more than 30 under his own name. Frisell has played in Motian’s bands since 1981, and has said that “playing with Paul has turned out to be one of the most important and inspiring relationships in my life.”

Although the album’s title is suitable for a law firm, it fits the date: Frisell shares the spotlight well, and each player has a distinct influence on the album’s sound. Paul Motian is possibly the most liquid, ethereal drummer on the planet, and the gentle spaciousness he brings to every session is in full effect here. Unsurprisingly, much of this album has a sound similar to last year’s I Have the Room Above Her, a Motian trio recording featuring Frisell and tenor saxophonist Joe Lovano. Carter brings a welcome helping of forward-moving swing to the session, and demonstrates himself a skilled colorist in his own right.

Despite the album’s downtempo vibe, Frisell imbues the session with a “hanging on to the cliff’s edge with my last available fingernail” feeling with his melodic sense. It’s not just he way he plays melodies, but the way he just barely plays them: the 1940s pop tune “You Are My Sunshine” is almost unrecognizable at first, but emerges almost like an image methodically constructed from puzzle pieces. More artists have recorded the traditional folk tune “Pretty Polly” than I can name, but this is first version I’ve heard that is musically dark enough to live up to the song’s morbid subject matter (about Polly, who is taken into the hills by her fiancé and murdered), with an ominous sense of dread provided by Frisell’s loop/delay effects and Carter’s distant rolling thunder bass lines.

A melancholy tone characterizes much of the proceedings, as it does on any Frisell release, but there are moments of undeniable joy as well. “On the Street Where You Live”, from the Broadway musical My Fair Lady, is given an upbeat lilt, and the entire band is clearly having a good time on the album’s two Thelonious Monk standards, “Raise Four” and “Misterioso”. Originals include two by Frisell: “Monroe”, a dedication (I assume) to bluegrass pioneer Bill Monroe, which appeared first on his countrified 1999 release Good Dog, Happy Man and again on East/West; and a new tune, “Worse and Worse”. The sidemen contribute one composition each: the Carter-penned “Eighty-One” first appeared in 1965 on Miles Davis’ E.S.P.; and Motian’s “Introduction”, originally conceived as solo guitar piece for Frisell, was on Motian’s 1984 trio date, It Should’ve Happened a Long Time Ago.

That the session ends with a bluesy take on Hank Williams’ “I’m So Lonesome I Could Cry” is telling: at turns brooding and hopeful, Bill Frisell’s musical world is similarly dichotomous. Having life to the full means experiencing all it has to offer: the joy and the pain; the certainty and the mystery. We could ask Frisell why an accomplished jazz musician such as himself would stop making jazz records for almost ten years…but I expect that, rather than answer, he’d sit down, pick up his guitar, and just play us a tune.

In person, Ornette Coleman is gentle and soft-spoken, completely the opposite that you would expect from a man who would redefine jazz in the 20th century via defiant, audaciously titled albums like “The Shape of Jazz to Come” and “This is Our Music”. Coleman’s musical vision is intensely personal, and over the course of his almost 50-year-long career, he has never lost sight of it. He has gone into occasional periods of semi-retirement in order to define, refine, or expand upon it, and the albums that come out after these “recording sabbaticals” generally offer a new, earopening demonstration of his singular approach. Coleman has just released his first album in ten years, and I’m pleased to report that it was well worth the wait.

Sound Grammar was recorded live in Ludwigshafen, Germany in October of 2005 with the same band Coleman has been touring with since 2003: his son, Denardo Coleman on drums and two bass players: Greg Cohen and Tony Falanga. Denardo may not be remembered as the most versatile drummer in jazz history, but it would be hard to find one better suited to this group: having first appeared at the tender age of 10 on Coleman’s 1966 album, The Empty Foxhole, he was practically raised to play this music. Greg Cohen hails from a diverse musical background: a principal member of John Zorn’s avant-Jewish supergroup Masada, he has recorded extensively with maverick singer-songwriter Tom Waits and appeared on albums by artists as wideranging as Laurie Anderson, Holly Cole, David Sanborn, and Misha Mengelberg. Tony Falanga has a diverse background as well, but in another sense: he’s performed with top-shelf jazz artists Wynton Marsalis, Joe Lovano, and Jim Hall; but also appeared as a soloist in chamber ensembles like the New York Concertino and the Tchaikovsky Chamber Orchestra.

While a two-bass lineup may be unusual in typical jazz circles, it’s not particularly unusual to Coleman, who toured Europe with two bassists (David Izenson and Charlie Haden) back in 1968. Sound Grammar does have a bit of a retrospective quality to it: two tunes are reprised from previous albums (“Turnaround” and “Song X”), and sharp-eared fans will recognize a few themes in the six new titles: “Matador” first appeared as “P.P. (Picolo Pesos)” on the Sound Museum recordings, “Sleep Talking” was first heard as “Sleep Talk” on Prime Time’s 1979 release Of Human Feelings, and “Call to Duty” (a new composition) has been turning up on recent bootlegs as “Crying Without Tears”. 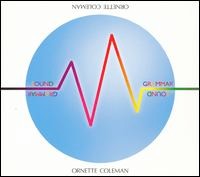 Whether the new titles were chosen for creative or licensing reasons (Sound Grammar is the first release by Coleman’s new label by the same name) hardly matters when the performances are as fresh and exciting as these. Denardo provides a feeling not unlike a little Dutch boy with his finger in the dike: a tiny bit of restraint holding back (and occasionally unleashing) a tidal wave of energy. Falanga, playing predominantly arco, functions as Coleman’s counter-soloist/foil, much the same way Don Cherry did in the original quartet. Cohen holds down the more “traditional” bass parts, and is an absolute monster in that role, providing a good bit of the band’s propulsive force. Coleman’s playing is nothing short of remarkable. His tone packs an urgency few can match… steeped in the blues, it projects the full range of human emotion. People forget how beautiful Coleman’s playing is: his melodies and solos display little of the noisy edginess commonly associated with the avantgarde. It’s the fact that everyone in the band is simultaneously improvising around those melodies, and without the traditional rhythmic anchor of a chord-based structure, that makes his music “difficult”.

On Sound Grammar, Coleman wastes no time getting to “difficult”. The opening number, “Jordan”, takes off at a break-neck tempo, with Falanga deftly framing and embellishing his every move. Coleman takes a brief turn on trumpet before the tune stops on a dime and “Sleep Talking” comes up, giving the audience a chance to catch their breath. This piece is radically reinvented from the hard-funking original. Here, the “Rite of Spring”-quoting melody floats in a mesmerizing, almost ambient sonic environment built primarily by Cohen, with Coleman and Falanga gently weaving gorgeous contrapuntal lines all around him. Things liven up with a swinging take on “Turnaround”, and lighten up with the delightful “Matador”. “Call to Duty” is another highenergy workout, and “Once Only” sublimely beautiful. “Song X” makes an ideal set-closer, this familiar tune isn’t given as radical a makeover as “Sleep Talking” above, but it still sounds new, as Falanga is a very different soloist than Pat Metheney. Denardo takes a rousing solo before his dad picks up the violin for little “Ornette Coleman String Trio” jam with Cohen and Falanga.

Sound Grammar isn’t so much a new chapter in Coleman’s musical lexicon, as much as it is a re-affirmation that he was right all along. Many musicians alter their style in order to reach a new audience, a larger audience, or simply to better fit their own changing world view, and there’s nothing wrong with that. Just the same, we hold in the highest esteem those artists who never change, who doggedly cling to their ideas come what may. Hearing the warm applause of this large German audience, it would seem that this soft-spoken native Texan has finally arrived, but the truth is he was here all the time. It’s the rest of the world that has finally caught up to Coleman, and lucky for us, he’s still here. The integrity and quality of this performance suggests that a lot of great music may still lay ahead.