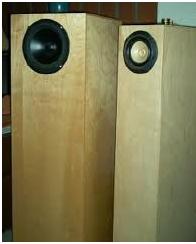 Their reasonable price and potential for loudness caters to college students and headbangers alike. Their sound quality is decent, but it could be better.

This new version of the original Horn may not be pretty to the eye, but its sound quality makes up for its unattractiveness.

The old adage about never judging a book by its cover is certainly true when it comes to high-end audio products. The aural experience is often quite disappointing, even though the industrial design of the product is brilliant. Design and construction quality is very important, but what good is a box filled with overpriced wiring and fancy capacitors if it doesn’t communicate with you? Isn’t this about feeling something internally (aside from gas) that sticks with you for the rest of your life? Music is performed by a lot of really messed up people: Miles Davis, Charlie Parker, Robert Johnson, Mozart, etc. were all mental patients. They had demons. Those demons were on display with every single note. That’s also why their music touches us so profoundly.

Equipment that eliminates all of that insecurity, anger, sorrow, isn’t really worth buying. Accuracy is fine if it allows one to hear what is on the recording, but I find that a lot of components sacrifice alcohol-infused blood and guts for the sake of neutrality and that just doesn’t fly with me.

Ed Schilling is never going to win any awards for his Horn loudspeaker; at least not from the Philippe Stark School of design, but he gets my vote for creating something inexpensive that connects. The Horn has undergone a cosmetic overhaul since I first reviewed it back in 2002, with a cabinet that is now veneered with Red Oak, Birch, Cherry, Mahogany, or Walnut. The binding posts that once sat on top of the enclosure, now reside on the back of the real panel in a far more convenient position. Not only does it look dramatically better; although not quite in Sonus Faber-territory, it sounds better as well.

The biggest reason for the change in the sound is that Ed moved on; or should I say he married up with the 4.5″ Fostex FE126E full range driver. The 126 must be the talk of the town in Leesville. At 93dB, the FE126E are more efficient than the FE108 Sigma that Ed used in the original Horn and also require significantly less break-in time. When I emailed Ed about that issue, his response was “in the morning.

The Horns are a rear-loaded (so many jokes, so little bandwidth) cabinet designed to work best in the corners of your room. The speakers use the corner reinforcement to give the sound some oomph as one can only expect so much out of a 4.5″ driver. The speakers are rather small at 30″ H x 6″ W x 11.5″ D, so it is unlikely that your significant other is going to have a meltdown over their appearance.

If you have to, position them out into the room; although I would advise keeping them within 24″ of the wall behind them, I would try to keep them closer to the corners. You start losing bass response and the presentation becomes a tad too lively if you get too free with their positioning. The driver has some extra energy in the upper midrange that benefits from some boundary reinforcement, and I noticed that vocals lost some of their body if the speaker was too far into the room.

Another set-up issue involves the use of silver cables. I really didn’t like how they sounded with the original Horn, and my feelings have not changed about their use with the FE126E. These drivers need copper cables, regardless of whether you are using 45s, EL84s, 2A3s, or solid-state. I can appreciate the use of silver cables in a dark, lush sounding system, but not in this case.

The biggest difference between the original Horn and the revised version is that they are much easier to drive and stomach with solid-state amplification. Even though I know that he’s really a closet tube guy, Ed Schilling is really smitten with the sound of the Horns with Nelson Pass’ First Watt F1, which he feels has the best of both worlds; the organic magic of a good tube amp, and the slam and consistency of a solid-state amplifier.

I settled with the Horns 24″ from the wall behind them (from the wall to the rear of the cabinet) and 20″ from the sidewalls. I experimented with toe-in, but ultimately preferred them facing straight ahead. My room is 20′ x 13′ x 8′ and I needed less than five watts to drive my wife upstairs with Metallica’s “One” from And Justice For All. The revised Horns can certainly play a lot louder than the original version and take a great deal more abuse

On the other end of the scale, the revised Horns resolve far more detail and are extremely engaging at more socially acceptable volume levels. Driving the Horns with the Red Wine iMod and Leben CS-300x integrated was the most fun I’ve had with equipment in a long time. Ensemble Explorations’ stunning recording of Mendelssohn’s Octuor op. 20 has the silkiest sounding strings and the combination of push-pull EL84s and the Fostex driver was, for the lack of a better word, enthralling. I’m comfortable enough to admit I spent the evening playing air violin and cello. Never be afraid to be the closet concert violinist that lives within! Mental illness is contagious apparently.

Folk music has become a greater passion of mine since becoming a parent (can’t imagine why) and I threw everything I had at the Horns including the outstanding new release from the Mammals Departure.

The Horns’ midrange clarity and punchy midbass gave the music real snap and immediacy. If you like your vocalists front and center, the Horns might be an option that you would find appealing. My one nitpick would be that the upper midrange was somewhat thinner sounding than I like. In comparison, my Spendor SP2/3s and Cain and Cain Abbys have more meat in that area and sound fuller. The Horns are the furthest thing from fatiguing, but I would caution against using really analytical equipment with them to avoid exacerbating this dimension of their sound. One solid-state amplifier that really worked with the Horns was the Arcam Solo; warm and punchy and engaging with all kinds of music.

By whatever means it is accomplished, the prime business of a play is to arouse the passions of its audience so that by the route of passion may be opened up new relationships between a man and men, and between men and Man. Drama is akin to the other inventions of man in that it ought to help us to know more and not merely to spend our feelings. – Arthur Miller

Funny me, but I thought that was the prime business of a pair of speakers as well. For $775, the Horns do that remarkably well with both tube and solid-state amplifiers. The real issue for me is trying to figure out who would benefit most from trying these speakers.

Are they something that would appeal more to old-school audiophiles who have heard everything and are jaded behind belief, or to younger music listeners who want something that can play at silly levels and not explode or sound like crap, be driven by, say, an Almarro integrated and Red Wine iMod, and open up their ears to high-end sound at a price that is truly affordable? Dumb question I know, but I’m buying a pair anyway.

Price: $775 per pair plus shipping