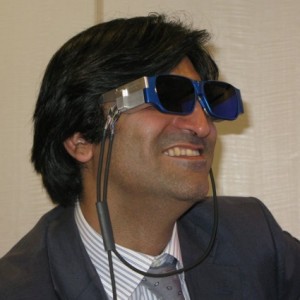 The guys out at Clear Vu made some pretty salty promises just recently.  In fact, they promised a full-featured Clear Vu HMD system for just two hundred bucks, and it’d be available next year.

Now, HMDs are a really, REALLY awesome idea.  Basically, they’re glasses that simulate a television screen.  In the case of Clear Vu, they’ll simulate a seventy-one inch diagonal screen, as seen from two and a half meters away.

For those of you who favor the SAE, that’s about seven-odd feet away.  Basically with an HMD, or Head Mounted Display, you slip on glasses that look like a huge TV.  What’s more, Clear Vu believes that these will be the start of the augmented reality concept, in which you can have objects floating in your field of vision, overlapping with reality.  Before you get freaked out and wonder if I’m on something, it’s actually a cool idea.  You know how your GPS shows arrows to your destination?  Think about if you actually SAW those arrows while you wore your glasses.  BIG HUGE SIGN up ahead says “Take Your Next Right”, when you’re supposed to take the next right.  This is the kind of thing that augmented reality can do for you.

But aside from that, even a standard definition TV at two hundred bucks for seventy one inches isn’t a bad deal, so I’m definitely looking forward to next year!