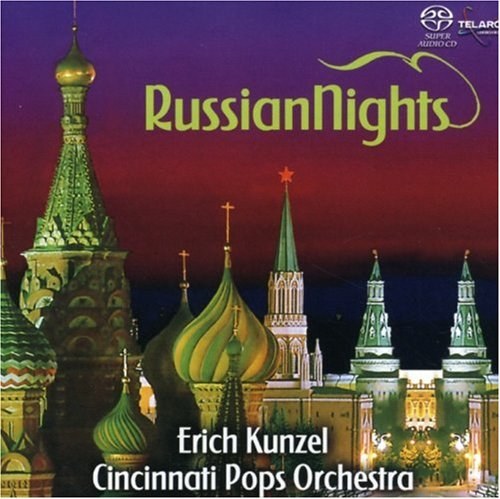 For February, Telarc brings us another Surround Sound Super Audio CD by Erich Kunzel and the Cincinnati Pops Orchestra. Russian Nights is a “day and date” release with both the Hybrid Surround Sound SACD and the CD Audio edition of this album arriving on February 27th. According to Telarc, the album is the 83rd Telarc recording by Kunzel and the Cincinnati Pops Orchestra and the 19th of their albums that have appeared as Telarc Super Audio CD releases. In addition to the new Russian Nights SACD, Telarc’s Heads Up label also added a new title to the company’s catalog of upcoming Super Audio CDs.

The new Russian Nights Super Audio CD is an original Direct Stream Digital (DSD) recording. It features Erich Kunzel and the Cincinnati Pops Orchestra performing 15 very well known selections from Russian composers. Russian Nights has appeared on Telarc’s schedule for SACD and CD release in the past and has been bumped back a couple of times. with that in mind, it isn’t too surprising to note that the recording was actually made two years ago on April 11, 2005 at Music Hall in Cincinnati, Ohio.

Telarc describes the new SACD as an album that “takes listeners on a colorful journey of popular classics and music from ballet and opera, all written by some of Russia’s best-known composers. From Glinka’s Russlan and Ludmilla to Mussorgsky’s Boris Godunov, Russian Nights tells enchanting musical stories.”

Kunzel says that “This disc is steeped in the rich musical language of Russia and includes recognizable orchestral classics such as Borodin’s Polovtsian Dances and dances from Tchaikovsky’s The Nutcracker and Swan Lake. We’ve also included Rimsky-Korsakov’s brilliantly orchestrated Capriccio Espagnol as well as music by the 20th century composers Khachaturian and Prokofiev.”

Russian Nights was produced by Robert Woods, recorded by Jack Brenner and mastered by Michael Bishop and Paul Blakemore with SACD Production Supervision by Erica Brenner. It was recorded on the Sony Sonoma DSD Workstation with EMM Labs Meitner DSD Converters, Genex 8500 DSD Hard Disk Recorder, monitored through the EMM Labs Meitner Switchman II Monitor Controller. The album was edited on the Sony Sonoma DSD Workstation. The Hybrid Layer Surround Sound SACD disc was made by Sony DADC at their plant in Terre Haute, Indiana.

The material on Russian Nights seems perfectly suited for Kunzel and the Cincinnati Pops. They play these well known Russian favorites with energy and passion. The dances from The Nutcracker and Swan Lake are favorites here but you’ll also enjoy the orchestra’s performances of Polovtsian Dances, Capriccio Espagnol and the Love Theme from Spartacus.