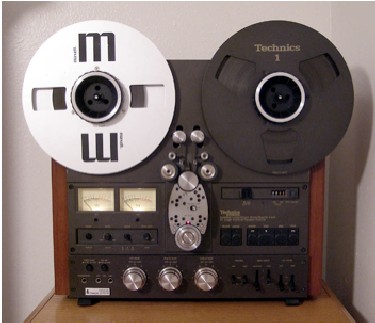 My fascination with reel-to-reel tape recorders goes back to the ‘70’s when I was a teenager. I was working as a busboy at a Red Lobster restaurant making $2 per hour and capable of spending at a rate much higher than that. I played drums in a garage band with some friends from school and we really wanted to make a demo tape so that we could put together a promo pack that would put us on the fast track to making rock & roll history. It had to be a 4-track/4 channel machine that allowed us to record one instrument at a time and add instruments as we went along. The TEAC 3340S was the top of the line machine for home studio use at a price of around $1400. I was better off financially than the other guys in the band so it fell on me to buy the equipment that would make us stars. Well a quick calculation told me that I would have to work 700 hours to pay for said machine. My standards started dropping faster than the DOW on Black Friday and I settled for a Dokorder 7140 at about half the cost of the mighty TEAC. It did almost everything that the pricier machine did … just not as well. And it was kind of clunky. The band was cohesive enough to make one tape of about 8 cover songs and I think that 10 must have been required to become rock stars because obviously there can be no other explanation for the demise of the band.

About 20 years went by with no thoughts in my head of reel-to-reel machines. Then while cleaning out a closet, I ran across that ill-fated tape of the old band. Well, I just had to get a machine to play it on to hear how awesome the old band was. eBay to the rescue! My first experience with eBay was a real memory jogger. I couldn’t believe the amount of vintage stereo gear for sale! I was hooked! The first machine that I bought was (you guessed it) another clunky old Dokorder 7140 (still much cheaper than the venerable TEAC 3340S). After playing the tape, I realized that 2 more songs would not have catapulted the band to fame and fortune. In retrospect …. we sucked! It’s a wonder that we ever played a paying gig! But it brought back my interest in reel-to-reels and other vintage gear, as well.

Over the course of the next year, the UPS truck would drop off a couple of boxes a week of whatever old stereo gear caught my eye (and my winning bid) on eBay. It was like Christmas every week! Soon the house was so full of stereo gear that my wife had had enough. I got to thinking … “hmmm, I’m in the 4th largest city in the US. There should be a vintage stereo store here.” So in 2003, my wife and I opened Sounds Good To Me! which has consumed every spare minute of our lives. I love it … my wife tolerates it (and helps me immensely).

Of all the different types of stereo gear that was popular in the ‘70’s, I think that reel-to-reel machines are the most iconic. When people visit my store, one of the most magnetic pieces is a reel-to-reel machine. “Wow … I remember back in the day we’d play a reel-to-reel at a party and it would play for 12 hours!” is a common remark that I hear. Of course they never played for that long and I just have to tell people that “it just seemed like 12 hours ‘cause you were HIGH!” Most 10 ½” tapes have a 3 hour duration per side (or less). So if it has Auto-Reverse and plays both sides … you partied for 6 hours max. But it sounded KILLER!

Of all the reel-to-reel machines that I have bought and sold over the past 3-4 years (average of 2-3 per month), my favorite has to be the elegant looking, great sounding Technics RS-1506. The drilled head cover and machined metal knobs along with the industrial grayish-black finish just scream out “SERIOUS MACHINE!” With those 2 big round things on it, it reminds me of other things that guys like motorcycles (another OCD subject for me). What were you thinking? Get your head out of the gutter!

The 1506 can accommodate reel diameters up to 10 ½” and play/record at 3 ¾, 7 ½ and 15 inches per second. It was available in a 2-track or 4-track model (mine is a 4 track with 2 track capability making it a very versatile machine). It has 3 separate motors and soft-touch full-logic controls making it one of the smoothest transport systems of any reel-to-reel machine out there.

At the time that it was made (1978-1986), this machine sold for $1500. They sell pretty regularly in today’s market at around $3-500 and are a true bargain for the audiophile who wants the best sound and the looks that say “I’m serious about listening to music!” With a good quality tape and a good quality recording, I would much rather listen to my reel-to-reel than my $9000 Wadia CD system. There is something relaxing about the slowly spinning reels as the music flows off of the tape. Most music of the ‘70’s and before was recorded in the studio on a reel-to-reel deck … it just seems natural to play it back on a reel-to- reel.

New blank tape is still manufactured and is easy to find (a lot of people don’t realize this). It’s not cheap … but it’s not a mass produced media like CD’s so the pricing is excusable. Used prerecorded tapes of all types of music are plentiful on eBay and not terribly costly, comparable in price to old vinyl LP’s.

If you are a child of the ‘60’s or ‘70s, and into audio gear, you already know what I’m saying. If you are a youngster who wasn’t around in the time of analog-only reproduced music, you owe it to yourself to give the format a try.There is something about the interaction of threading the tape from spool to spool and watching the meters dance to the pulse of the music that you just don’t get when your CD gets sucked into the player and you don’t see it playing. The cost is low compared to what most audiophiles spend on source components and it can just be FUN.

from aﬀordableaudio, By Gary Reiser