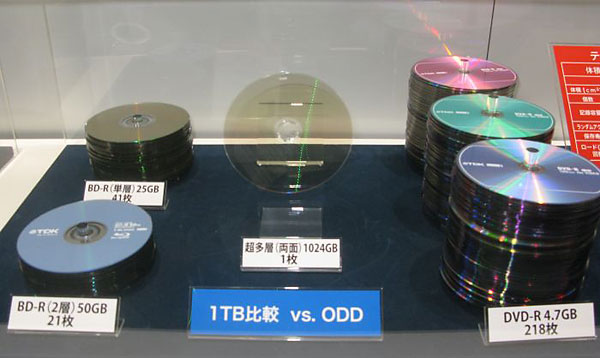 TDK has just unveiled their very own 1TB optical disk at CEATEC. While regular Blu-ray discs utilize only four layers for recording, TDK’s new disk is packing a whopping sixteen layers on both sides with storage space up to 32GB each! That also outshines the 400GB and 500GB discs released by Pioneer two years ago since the TDK disc has seven more gigabytes per layer than they do.

However, the new 1TB disk has a significant drawback, though. Its recording layers are measured at 260?m, which is more than double the thickness of a regular Blu-ray disc and current optical lenses will have a tough time trying to handle that. Nonetheless, TDK said that the new disk’s commercialization will depends on its manufacturers. According to Engadget, this company definitely has something to prove, considering that they haven’t sold the 10-layer 320GB discs they presented at CEATEC last year. So, that makes the potential success of this 1TB optical disk somewhat doubtful.