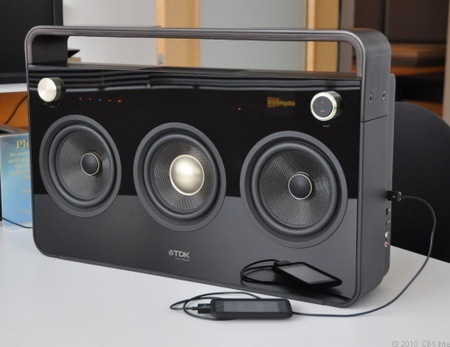 TDK has been in the electronics for quite a while now and they have produced various products. TDK has announced two latest boom box speakers namely the Two-speaker boom box and the Three-speaker boom box.

It has almost all the latest music related features like ipod and iphone support through USB and capable of playing WMA, AAC and MP3 music formats from a USB drive. The Three-Speaker boom box has two speakers each with 10 watts and a centre woofer with 15 watts. The core frame of the speakers is made up of aluminum which is light and strong. It can also play FM and AM with the use of an in-built receiver. The device can be controlled by remote and also by the touch sensitive buttons at the device. It features a bright and cute OLED screen to display the playing content.

These boom boxes are expected to hit the stores in January 2011 after appearing in CES 2011. Hence, the price of these products is unknown till now.