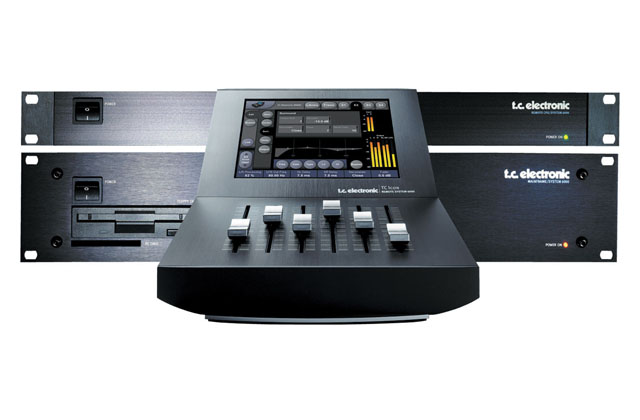 For those of you doing surround work over the last few years, it’s pretty evident that the TC Electronic System 6000 has become the de facto standard hardware 5.1 processor, providing many flavors of multichannel reverb as well as EQ and dynamics. But the unit is capable of much, much more, and the latest version of the 6000 Mastering software proves that this is a box that can be used with great results at one of the most critical stages of production.

Here’s a very brief overview for those of you not familiar with the System 6000. It’s an 8-channel outboard processor now available in two flavors: Reverb 6000 and Mastering 6000. The original Reverb 6000 features dozens of reverb, delay and boundary effects for any format from mono, stereo, LCR, LtRt to 5.1 and 6.1.

There are hundreds of presets available, including the Halls of Fame bank and the Skywalker Sound Collection, which are created by some of the most respected people in the music and film industry. The 6000 uses internal double precision processing, has excellent jitter rejection, and, if ordered with the analog option, great sounding AD/DA converters.

In the summer of 2004, Mastering 6000 was added to the System 6000 family, expanding the unit’s capability significantly. Mastering 6000 now makes the 6000 platform into a high-quality real-time mastering processor packed with a choice selection of precision tools for the mastering engineer like upsampled limiters, multiband processors, EQ, and even monitor matrix and format conversion.

Reverb 6000 and Mastering 6000 offer the same basic structure, features, and hardware configurations, with the only difference being with the algorithms used. At the unit’s heart is the Mainframe 6000, housing all processing, physical input and output, and connections for external control. The main control surface is the brilliant TC Icon touchscreen remote and CPU (easily the best user interface in the business, in my opinion), which connects to the Mainframe via Ethernet and enables multiple Mainframes and TC Icons/Editors to be integrated into a network. The TC Icon remote is also available as a software editor for both Mac and PC.
Each mainframe hosts up to four audio processors, which TC refers to as Engines, which have equal DSP power and that can be loaded with a variety of different algorithms from reverbs and effects to dynamics and EQ. Each of the four engines can handle up to eight input and eight output channels, depending on the chosen algorithm type. This enables all sorts of I/O configurations such as four stereo-reverbs, or two stereo-reverbs and a 5.1 reverb, or a full 5.1 mastering setup (which is what we’ll be focusing on) with EQ, dynamics and format-conversion in one mainframe.

The 6000 can operate at sample rates up to 96 kHz (although in many cases that means that only 1 or 2 of the engines are available depending upon the algorithm used), and its clock can be sync’d to any outboard source via wordclock or AES. The unit can also be automated via SMPTE timecode. 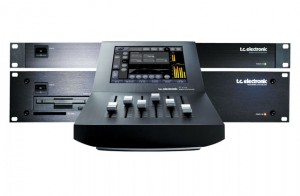 Although the basic System 6000 already comes with dynamics and EQ algorithms, Mastering 6000 contains a number of new ones with the increased precision and sonics required by a mastering engineer. After much research, TC found that just because a software plug-in or algorithm is called a “compressor” or “limiter,” there’s no guarantee that it will behave anything like its analog counterpart. Indeed, many digital limiters can actually add a type of subtle distortion that may not be heard during mixing or mastering, but can eventually be the source of severe listening fatigue later down the delivery chain when the audio hits a broadcast processor, MP3 encoder, or consumer CD player. As a result, TC developed several new techniques to ensure that distortion is always as low as possible and therefore won’t contaminate a signal with more problems than it fixes.

The new MD4 Dynamics Multiband processor features internal sample rates of up to 480 kHz along with the newly developed “DXP” processing that lifts up low-level detail rather than squashing the peaks (a technique all too common on most of today’s audio programs). DXP processing is said to be ideal for classical music, acoustic music, voice, film-to-broadcast transfers, and other situations where low-level subtleties tend to get lost. The algorithm also features normal and parallel compression, and the basic mode can be combined with EQ, MS processing, and upsampled, adaptive limiting. The 5-band structure uses phase linear reconstruction and a 48-bit fixed point resolution signal path.

The Brickwall 2 Limiter (which also features internal sample rates up to 480 kHz, a 48-bit fixed point signalpath, and is 24-bit transparent below the threshold of limiting) is a second-generation audiophile limiter with adaptive profiles built on TC’s investigations into distortion at the end of the listener and data reduction signal chain. Because the use of a limiter is varied from digital-over protection to maximizing loudness, TC has provided a number of different adaptive profiles (presets) as a reference point for most situations.

MD5.1 is a 3-band dynamics processor for five main channels plus wideband dynamics for the LFE. It offers Compressor, Expander, and Limiter for multichannel signals in one algorithm. Extensive linking parameters enable additional MD5.1 algorithms to be cascaded to process 6.1, 7.1 or 10.2 signals, and, if needed, a 7th steering input can be used to influence processing of one or more of the main channels.

A 4-band fully parametric EQ featuring six mono channels (which can be linked or used separately) and 48-bit processing of signal-path is also included in the package. Analog sounding, high precision filter models are used, and Softclip can be selected on each output. This is a general-purpose algorithm that can be used in conjunction with other algorithms or used by itself.
The 5.1 Toolbox is a wonderfully well thought out 5.1 monitor matrix that enables you to do just about everything (maybe even more) that a dedicated hardware monitor controller can do. Each of the 5.1 channels can be muted or soloed, gain individually trimmed, and you can downmix to stereo or mono. Even a speaker calibration utility is included.

Although Mastering 6000 comes with high-resolution dynamics processing and Monitor Matrix functions for mono, stereo, and multichannel signals, additional processing may be bought or even rented. The options include the popular UnWrap stereo to 5.1 up-conversion, George Massenburg’s MDW Hi-Res EQ, and BackDrop noise reduction. Additional stereo reverb and multichannel reverb and delay algorithms are also available.

Even though it’s functionally deep, the 6000 has always been a breeze to use thanks to Icon’s touch screen and logical navigation (maybe the

model for processor navigation). That being said, even the best navigation doesn’t matter if the unit doesn’t sound good, but functionality or sound quality has never been an issue with the 6000. The converters have always been considered top-notch, and the various processor algorithms work better than advertised and keep getting better since TC has constantly updated the software since its inception.

Since we are talking about surround here, Mastering 6000 can provide the ultimate in functionality in that realm. While MD4 and Brickwall 2 are stereo, MD5.1 is about as complete a 5.1 mastering algorithm as can be imagined, with an expander, compressor, and limiter all built-in. Couple that with presets that ensure compliance with just about any output standard, and the capability that we could only dream about a few years ago can now be easily achieved. We’ve used MD5.1 on a number of projects, and found that the ability to achieve high relative level with absolute peak limits is not only a breeze, but will sound great right up to the point compression absurdity. Of course, as with all units so powerful, having so much control can also provide some scary results in the wrong hands, but we’re all pros here and know the term “moderation,” right?

One of the best thing about all of TC’s 5.1 algorithms is their concern for the LFE channel. For instance, instead of just providing a simple level control, MD5.1 provides a separate LFE page with separate controls in each section (expander, compressor, limiter) of the algorithm. This is a most welcome inclusion, since in many cases the LFE requires an extra degree of precision that’s unfortunately not normally found in other processors.

Toolbox 5.1, the software monitor matrix, is certainly the equal to any monitor controller on the market. In many cases, it’s much easier to use than many hardware boxes with the same features, and generally has much more precise control of the various parameters. I especially like the downmix functions (downmix to mono is great to really hear how a mix is holding together), which most controllers either overlook or implement poorly. Having the built-in speaker calibration routine is also incredibly useful and time-saving.

Mastering 6000 (and Reverb 6000 for that matter) does far more than can be described in a single article. With a wealth of well designed and thought-out presets, excellent algorithms, and rock-solid hardware, it’s still the standard by which all other 5.1 hardware processors are measured. With the new tools that Mastering 6000 now provides, it has raised the bar even further.