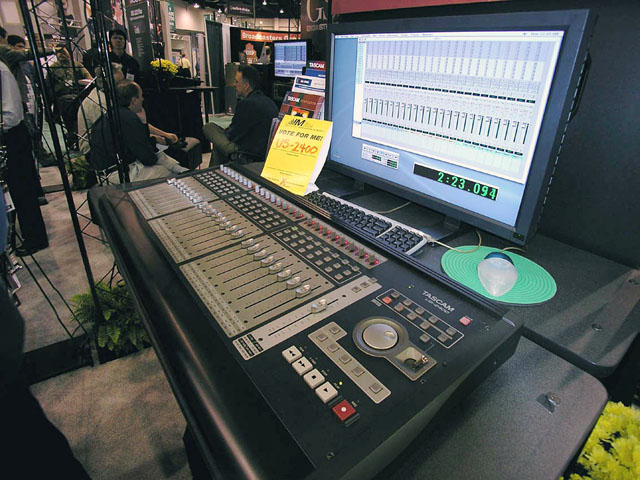 Tired of surround monitor controllers with only eight channels? If so, the TASCAM US-2400 DAW controller might be for you. This 24-channel USB console works with both Mac OSX and Windows XP, Windows 7 platforms, while supporting HUI or Mackie Control protocols. For those giant sessions, it can bank up to 192 channels and more.

Connection is easy via the supplied USB cable. For PC users, the system will recognize the 2400, install its own device driver, and tell you its ready to use. Mac people such as myself have to simply open the Audio/Midi Setup (Applications/Utilities) to confirm that the unit is hooked up as a 4-port MIDI device. Its honestly that simple. No installation software is included, as none is necessary.

The first thing youll notice about this controller is the 24 100mm touch-sensitive faders, and a master fader of the same caliber. Above each channel fader is a Mute, Solo, and Sel (Select) button, followed by a continuous rotary encoder surrounded by a ring of LEDs. These provide display and control of aux send, pan, and MIDI controller information. Its also quite useful that the encoders will show levels when set to Meter Mode.

Above the Master fader are Flip (to place the aux sends on the faders), Clr (clear) Solo, and SEL switches.
To the right of the Master fader sits the transport controls and a set of function keys (Scrub, Bank -, Bank +, In, Out, Shift). Above that are a joystick for surround panning and a jog/shuttle wheel, along with a Null button. Finally, there is a Chan (channel), Pan, Aux 1-6, MTR (meter), and F-Key (function). Aside of a power button and USB LED on the top, and a USB jack, a DC IN jack, and a Foot Switch controller on the back, thats it.

The 2400 can operate in several different modes. HUI emulation mode is the factory default, and works with Pro Tools. The Mackie Control mode will work with Logic, Digital Performer, and Sonar, but it will also operate in Native Mode if necessary. To set the controller for each mode, you simply put the unit in standby mode and press the SEL key and the appropriate AUX key for your desired DAW. For example, since I run Pro Tools, I held down AUX KEY 1 and turned it on using the Power key. I then opened Pro Tools, assigned the controller to MIDI Controller Ports 1-3 (each port represents a channel bank of eight). The joystick, which emulates the JLCooper MCS Panner, sends MIDI controller messages on Port 4. Once I called up a session, the first 24 faders jumped to attention — ready to be mixed.

When accessing the next group of 24 channels, Bank switching is accomplished (in groups of eight) by pressing the Bank + or – key. Additionally, you can move up or down one channel at a time by holding the F-Key and + or – keys. I did like the tight feel of the faders, and I forgot what it was like to have so much control on the desktop at one time. As for panning, the rotary encoders default to that mode, complete with a center pan indicator. They can also be used as sends by simply pressing the Aux key that corresponds to the desired Aux send. Also, by pressing the Flip key, the Aux sends will be placed onto the channels faders for additional control. I enjoy applying creative reverb swells this way, and it certainly is much more fun and musical than using a mouse.

As previously mentioned, the LEDs around the encoders can be used as real-time peak level meters by pressing the MTR key (note that some DAWs do not support this function). Its also important to note that the US-2400 does not have any form of scribble strips, since it was designed as a multi-platform controller.

Speaking of that, I found a great way to control my Reason tracks with the 2400 simply by assigning them individually to channels in Pro Tools via Rewire. This allowed me to control both the audio and MIDI files of Pro Tools, along with the levels, mutes, and pans of my Reason tracks. Very cool.

Since this is a controller, each application has its own unique set of multifunction keys. In Pro Tools for example, pressing the F-Key + Aux 1 brings up the Mix Window, the F-Key + Aux 2 brings up the Edit window, and the F-Key + Aux 3 shows the Transport window, etc. I found myself using the In and Out keys to set location positions, and the REW key to smoothly scroll backwards for repeat passes. Many other functions can be accessed with this controller, from Record arming to Autopunch and more. Its a flexible system, as I used it on both my HD rig and my Mbox/LE rig. I found it almost comical to have a small laptop, Mbox, and 24 channels of faders on my desk!

TASCAM has done a nice job with the US-2400. The overall operations are simple and smooth, and its nice to have so many faders at your disposal — not to mention a good onboard surround panner and jog/shuttle wheel. Since it works with several different platforms, it would be quite useful for those who run multiple DAW software programs. If you insist on scribble strips, you may have to look elsewhere, but this versatile, flexible controller will certainly satisfy a majority of users.