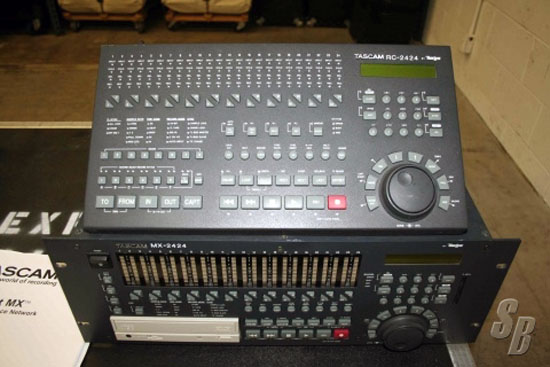 By now, reviews of the new TASCAM MX-2424 hard disk recorder/editor have, like the unit itself, been on the street for some time. And while the unit has been almost universally acclaimed as a 24-track recorder/editor, I must admit that was not my main interest in it. For those of us living a the world of 96k, there is a constant search for another stable tool at that resolution. Now, with version 2.0 software, the 2424 suddenly becomes 96k capable (although the number of available tracks are halved to 12), which is a function sorely needed for mixing for DVD-A release, and something that I’m always on the lookout for.

So just in case you’ve been living in a cave for the last year or so, here’s a brief rundown on the unit. The TASCAM MX-2424 is a dedicated 24-track hard disk recorder/editor developed in conjunction with Timeline with a direct lineage to their previously successful (and post standard) products such as the MMR-8 and MMR-16 digital dubbers. The unit is very straightforward operationally in that it’s laid out more like an analog multitrack than a DAW, although those typical workstation editing capabilities are readily available as well. Best of all, the unit reacts just as you would expect an analog machine to, with no appreciable latency or punch-in/punch-out timing problems sometimes associated with hard disk recorders.

While the front panel closely resembles an analog multitrack, the rear panel has every feature needed for everyday professional use. First, a large number of I/O options allows the user to configure the unit to meet most needs. Twenty-four channel analog and TDIF, ADAT lightpipe, and AES/EBU I/O (on the now-standard DB-25 connector) are available. Also standard are two channels of AES/EBU and S/PDIF digital I/O that is routable to and from any stereo track pair. The rear panel also has a punch in/out footswitch jack, MIDI and word clock in/out/thru, TRS balanced LTC SMPTE timecode in/out/thru, a port for attaching the optional full-function RC-2424 remote, a TL Bus for cascading multiple MX-2424 decks, video sync in/thru, and an RJ-45 Ethernet connector for connecting a personal computer to the MX-2424 for operating the ViewNet application or for loading software upgrades from TASCAM’s Web site.

The ViewNet graphical interface application actually brings the unit to life as a DAW. By connecting a computer (either a Mac or PC running Microsoft Windows 98 or NT) via a 100 Mbps (Megabit per second) Fast Ethernet connection and installing ViewNet, the computer is able to not only control the transport functions of a single or multiple 2424’s, but perform standard editing functions as well.

One of the best things about the 2424 is the fact that it writes both 24-bit Sound Designer II and Broadcast Wave formats at up to 96 kHz. This makes it easy to move files between the unit and any of the popular DAWs (like Pro Tools, Nuendo, Digital Performer, and the like). We did this several times with no trouble at all.

Since the unit was designed in conjunction with TimeLine, it has a number of synchronization choices that we’ve come to expect from TASCAM products. With such features as SMPTE Timecode In, Out and Thru, Word Clock In, Out and Thru, MIDI In, Out and Thru (for controlling the MX-2424 via MIDI Machine Control and MIDI Timecode), Video In and Thru, TL-Bus In and Out (the MX-2424’s synchronization interface that allows for up to 32 machines (768 tracks at 48 kHz or 384 tracks at 96 kHz) to be locked with sample accuracy without the need for any external synchronizer, the unit is prepared for just about any sync situation.

For backup, a 2X DVD-RAM drive (which is now being adopted by other manufacturers and may become the backup solution of choice in the near future) can either be installed in the front bay of the 2424 or connected to the rear-panel SCSI port. In addition to the benefits of being a secure archive and transfer format, DVD-RAM discs represent a substantial long-term cost saving over hard drive-only backup, with 2.6 GB discs available for as little as $10 and 9.2 GB for about $40.

One of the best things that TASCAM has done is to make available as much information as you can handle on a dedicated MX-2424 Web site (www.mx2424. com). Not only can you get a comprehensive tour of the unit before you buy (or even after), but everything from manuals to installation instructions to advanced operational help is available via downloadable PDFs. Add to this the latest software upgrades from the download page, and you have anything you need at your fingertips. Bravo, TASCAM, for making such thorough information so easily available. 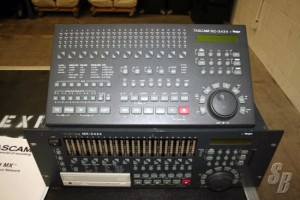 I used the MX-2424 for 6-channel 96/24 5.1 mixdown of a custom library music catalog. One of the things that really surprised me about the unit is the sound of the converters, which are really excellent for a unit in this price range. Previous to this session, the unit was used as a 48k 24-track in a tracking session with the legendary The Ventures (yes, they’re still going strong after 40 years of being together), with similar results that were, if anything, even more impressive. While just a few tracks can sound good with just about any recently made converter package, the real test comes with a full mix of 24 tracks. In all cases, the 2424’s converters come out sounding very good indeed.

In terms of software, we had to update the machine to version 2.0 and install ViewNet. While both those operations involved a little initial head scratching, installation went pretty smoothly. ViewNet does provide some basic editing capabilities, but it doesn’t have waveform editing and the level of intricacy that a typical DAW has. This is on the way, however, with the promise of the upcoming MX-View that really does turn the unit into a full-function waveform editor. Best of all, MX-View will be free when it’s released.

Considering the price, features, file format compatibility, and lineage, the MX-2424 should be considered for any multitrack mixing or tracking situation. For those looking for a 96k machine that really works and doesn’t cost a fortune, this is it.