The latest SACD release from the Rolling Stones catalog arrived today in record stores. It is a track «maxi-single» that features 7 different 5.1 SACD Surround Sound mixes of the Stones classic song «Sympathy for the Devil». In addition to the new release of Sympathy for the Devil on Surround Sound SACD, I also chatted with the folks at ABKCO Records about reports of a U.K. release of the Stones Remastered Series discs on regular Stereo CD as well as Hybrid Stereo SACD.

Packaging and Music Cash
The new Stones maxi-single is called Sympathy for the Devil Remix (ABKCO Records 18771-9666-2). It is a single inventory, Hybrid Layer Surround Sound CD disc that comes in a standard CD jewel case and features a Rolling Stones Remastered Sticker on the upper right hand corner of the package. The front cover features the maxi-single title information and the Stones’ Lips graphic in a holograph that changes appearance as the jewel box is tilted. According to ABKCO, the cover graphic is «a unique animated lenticular version of the band’s iconic lips and tongue logo, outlined in fire».

Inside the jewel box, the buyer will find a «Music Cash» $3.00 off coupon which is redeemable with the purchase of any of the 22 Rolling Stones Remastered Hybrid Stereo SACDs that were released last year. The coupon notes that it is only valid in the U.S. from September 16th through December 31st. On the back of the coupon (which looks like a check), there is a list of 75 record retailers which are honoring the coupon.

Track Layout and Surround Sound Mixes
The Sympathy for the Devil Remix disc features radio and full length remixes of Sympathy of the Devil by The Neptunes, Fatboy Slim and Full Phatt as well as 5.1 Surround Remix of the original version of the song. The track layout of the disc is as follows:

Listening to the disc in surround, all 7 versions of the sound make good use of the surround sound field with Mick Jagger’s vocals taking center stage and the four primary channels being effectively used by the band’s instruments and the additional instrumentations in the remixes. The disc certainly makes the case for more of the Stones catalog to be considered for Surround Sound SACD in the future. Stones fans will find it an enjoyable addition to their collection.

The disc credits note that ABKCO’s Jody Klein was the Remixing Coordinator and «Jelly Bean» Benitez served as Remixing Supervisor. The Analog to DSD Digital transfers were done by Teri Landi and the disc mastering for the SACD was handled by Bob Ludwig at Gateway Mastering except for one track that was mastered by Herb Powers.

The remix disc is a Surround Sound SACD that features 5.1 SACD Surround, SACD Stereo and CD Stereo versions of the music on the disc. It is playable on SACD, CD and SACD compatible DVD Video players.

Availability
The Sympathy for the Devil Remix maxi-single by the Rolling Stones is available at a variety of stores including Best Buy, Circuit City and Tower Records for $4.99 this week (the disc’s list price is $6.99). It is also available from several web sites that sell SACD discs including Elusive Disc and Music Direct.

According to ABKCO Records spokesman Bob Merlis «The record buyer in the U.K. encountered discs that were manufactured last year that are not in current production. Originally, ABKCO had hoped to make the simultaneous worldwide release of 22 titles but, alas, worldwide Hybrid SACD production capacity was overtaxed and the decision was made to do a limited one-time, non-SACD run for a few markets where it was apparent there would be huge gaps in order filling. Throughout Europe, all of the Stones titles in the series are now available as dual layer Hybrid SACD discs so what was observed here was, if not an anomaly, an anachronism. I can assure you that ABKCO’s support for the SACD format is wholehearted and unwavering. I hope that explains the situation to your satisfaction (pun intended).»

So it turns out that the story on the Internet is true and a bit more interesting than originally thought. The conventional CD Audio copies of the Rolling Stones Remastered Series discs appear to be a limited time pressing which now enter the category of collectables.
Sympathy for the Devil Remix by the Rolling Stones (ABKCO Records 18771-9666-2) 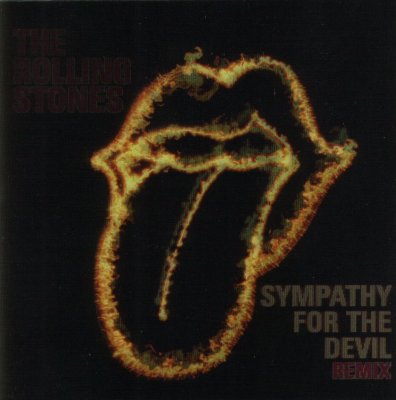