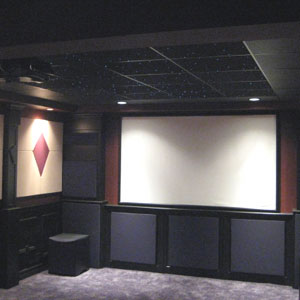 Well folks, considering that right about now (at least for my American readers), your Thanksgiving feast is now reduced to a pile of leftovers.  Maybe you’ve got plans for them, and maybe you’re just going to spend the next few days chewing your way through them.

It’s not just Thanksgiving feasts that become leftovers-sometimes home theaters do too.  And for one homeowner, changing that leftover theater room became a whole new sort of leftover approach.

There were complaints about the original, you see…things like “the subwoofer is too boomy” and there were some echo troubles also (which, but I’m not sure here, I think are probably the same issue or close to it–correct me if I’m wrong down in the comments), and these were largely addressed with some structural improvements.

And then the Atlantic Technology speakers and the Integra Blu-ray player with matching receiver and the Epson projector and the one hundred five inch screen get added in, and you’ve got a complete package.

When you take a theater with lots of issues and make it into a masterpiece of sound and image quality, you get a sweet home theater setup. What else can there be?