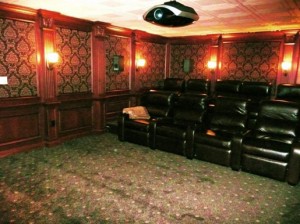 So I was reading an article today in Electronic House that I had to pass on to you, but it seems more and more like the new standard in sweet home theater setups is NOT the LCD television, or the plasma television or even the LED television–the new standard is the projector.

And like the home theater you see above, the centerpiece is the projector.  This particular homeowner replaced a big box television with an InFocus projector and Da-Lite screen, along with a Denon receiver and Triad speakers.

Indeed, it’s the projector that makes a home theater sweet these days.  And considering that projectors can be had for less than their big screen counterparts, it’s not a terrible idea to consider picking one up.  it might help your home theater be as sweet as it can be.