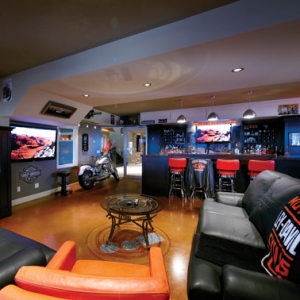 After seeing the Bentley home theater setup, I suppose it was really only a matter of time until someone decided to make their own sweet home theater setup around a whole new automotive passion–Harley Davidson.

Yes, that’s the Harley Sweet Home Theater you’re looking at–containing a bar, poker table and setting area in the same general space as a home theater setup containing one plasma TV, two LCD TVs, a set of in-ceiling speakers and a whole bunch of other gear from Elan, and a Panasonic Blu-ray player.  The three TVs can operate independently from each other, or show the same movie on each thanks to an RTI remote AND yet another item from Elan, a touchpanel.

With all these exciting pieces of equipment, along with a whole bunch of home theater gear (yeah, I was referring to the Harleys before), there’s not a bit of doubt that this qualifies as a sweet home theater setup.