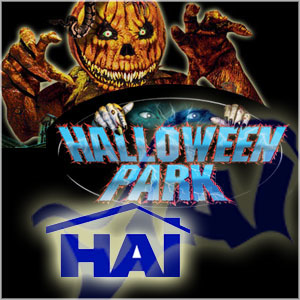 Okay, so we’re really stretching the definition of “home theater” on this one, but it actually DOES apply if you use the term “theater” in its original sense of stage acting.  And even if it didn’t apply, it would still be entirely too cool to pass up.

Today we’re talking about the Halloween Park Haunted House, in honor of the holiday we just left behind.  I know a good portion of you are probably still sleeping off your nougat coma from two nights ago, so settle in with a cup of tea and check out this spectacular array of theatrical wonderment that’ll blow you away.

This may be the first ever interactive haunted house on the face of the earth.  Sure, we’ve all gone through spook houses and scream parks and whatnot in which you walk around and people in costume jump out of corners and the like, but Halloween Park, thanks to a series of contacts, motion sensors, and a computer system involving eight hundred lines of code, is a wholly different animal.  When you make contact with objects or areas in Halloween Park, there’s a tangible response.  Step somewhere and something jumps out.  Move a book and a hidden door opens.

It’s a positively amazing process that yields a really spooky show, and shows us all exactly the kind of thing we could be doing with OUR home theater setups if we wanted to take that kind of time.