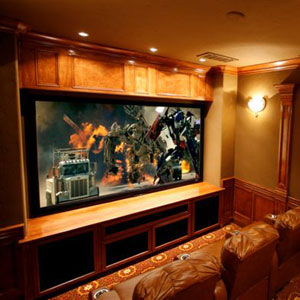 I love this one, folks.  I truly do.  Because it’s a gigantic middle finger in the face to all those fitness buffs out there who are convinced that we’ll all die bloated and miserable if we don’t have a home gym and use it regularly instead of watching TV.

But what else can you do with a room that measures less than two hundred square feet?  The homeowners in question figure they could do nothing else BUT store their workout gear there…but then they got a vision.  A vision of a small but superpowered home theater setup.  It’s a dream we’ve all shared, especially if we don’t have a big room in the house to do the job.

Anyway, how’d they get a home theater in a room measuring just under two hundred square feet?  Very carefully.  They also removed an existing wall, took out two bookshelves and removed a closet to ensure the theater would have the most square footage it could in that area.  And some networking tech connected the theater to the family’s four hundred disc changer, but it also forces every other TV to watch what’s on in the theater.

It’s a fantastic setup, folks, and a great one to remember if you’re up against a wall…or two.