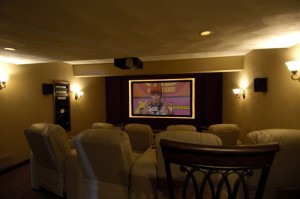 I know that headline’s something of a puzzler to you, because I really hadn’t heard of something like this either.  A floating screen isn’t exactly the kind of thing you run into every day, you know

See, the centerpiece of this sweet home theater setup is that “floating screen” I mentioned.  A floating screen is actually what it sounds like, a screenwall based around an optical illusion in which a one hundred ten inch Stewart screen appears to be floating in the middle of that wall.  It isn’t actually floating, of course, it only just looks like it.

It’s not just the screen that brings people in for this one, though–there’s also a Runco projector, Paradigm speakers, and an Xbox 360 doing double duty on DVDs and games.

Between the unusual centerpiece and the array of quality hardware to back it up, there’s no doubt that this is a sweet home theater setup no matter how you look at it.