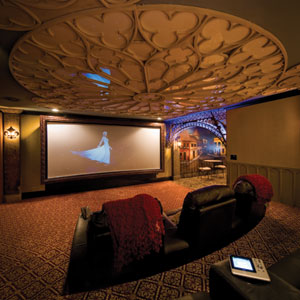 Apologies to the Francophiles in the audience–my Francaise is a bit on the rusty side–if I screwed up those genders, but the thrust of the title remains.  Today we’re talking about a sweet home theater setup that has a decidedly Parisian theme.

Jason Crist, a Tennessee homeowner, decided that the chances of him getting to Paris were probably pretty slim, so he brought a little of that style home with him, and replicated in his upstairs rooms the Eiffel Tower, the Arc de Triomphe, Notre Dame cathedral, and of course, he capped it all off in truly AMERICAN style by putting a hundred and fifty four inch projector screen in the middle of it all.

Right now, any of my Parisian readers are probably just a little horrified, but that’s okay, because we’re here for the tech data anyway. Supplementing the curved, homemade screen is a set of Polk Audio speakers providing 7.1 channel surround sound, a Panasonic projector,  and a panoply of lights including fiber optic star effects and some rope lighting.  After all, this is a mockup of the City of Lights, n’est-ce pas?

Say what you will about putting a Parisian themed home theater in, but with all that hardware and attention to detail, I call it le cinema du maison sucre.  Or, translated from the halfassed French, the sweet home theater.