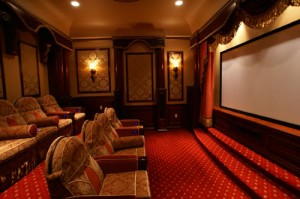 And yet, sometimes, disaster represents opportunity as much as calamity.  In the case of today’s sweet home theater setup, that’s exactly what happened.

When a home in Florida burned down–and completely, too, by the sounds of it–the homeowner was left with a fat insurance settlement check (see, this is why you pay your homeowner’s insurance bill) and a need for a new house.  So rather than simply rebuild the one he had, he opted to build a slightly new one, with a home theater inside.  But being as the check was finite, he had to be careful, and thus assigned contractors a very strict budget.

The results are astonishing.  Lighting controls and a retractable curtain are just part of the equation here–there’s also a JVC projector with a hundred and ten inch Draper screen, a Marantz receiver, Monitor Audio speakers and more.

Taking something as horrible as a house fire and turning it into this is a fantastic way to make a sweet home theater setup, both for what it is and for what it represents.