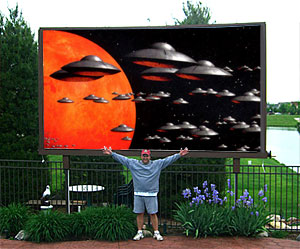 There’s a whole lot of people out there who crave the “drive in movie experience” of yore.  But Kevin Van wanted it so badly that he built one.  In his backyard.

He bought his first projector for inside the house, and it got him to thinking, why can’t I use this projector outdoors?   But that wasn’t the end of his quest to remake the drive in, no…only the beginning.   Get this–the guy went so far to restore the “drive in movie experience” that he bought and restored nine vintage drive in speakers, paying a hundred and ten bucks for the lot on eBay.

He put a concession area on his screened-in porch to keep the bugs out, and included a commercial-grade popcorn popper, a hot dog steamer, a nacho chip and cheese warmer and even a chili warmer.  He even built his own screen.

But he’s also got a bit of the twenty-first century hooked in as well–a Sharp projector, a Sony Prologic receiver, Pioneer amps (the vintage speakers on eBay?  Pioneers all.) plus some Bose and MTX speakers too.  Speakers are a big part of outdoor theater.

The sheer devotion to the medium definitely earns the appellation of sweet home theater setup, and hopefully, the heartburn from the chili will be mistaken for the warming love of home theater.