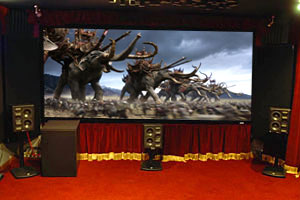 A lot of people aren’t fond of widescreen.  I heard the moaning often enough during my video store clerk days about letterboxing and suchlike, and I doubt it’s improved much sense.  But for guys like Wayne Hanson, widescreen isn’t a format–it’s a challenge.

While most home theater owners dream about 16:9, Hanson went for the brass ring that is 2:35.

And get it he did–you can see it at right.  But this isn’t just about the monstrous girth of Hanson’s screen, no sir!  This is about plenty of other choice gear included in the setup, like a BenQ front projector in DLP (probably better given the screen he’s on), M&K speakers, a Da-Lite hundred and thirty three inch screen, a PS3 straight out of Sony and plenty more.

Just managing to get a 2:35 screen makes for a pretty sweet setup, but when you’ve got all that other stuff in there too, you end up with something that’s almost past sweet.