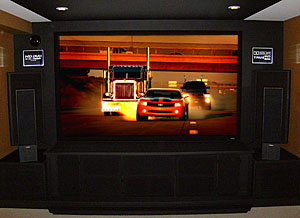 A little at a time, a new piece here and there, and soon (well, in seven months) he had a home theater system.  And though it sounds like he spent a small fortune on this sweet home theater setup, he actually spent ten thousand dollars.

Now, that SOUNDS like a lot of money.  And objectively, on the surface, yes it is.  But think about this–he didn’t spend ten thousand dollars…he spent three hundred and fifty bucks a week. Every week. For seven months.  And that doesn’t sound nearly as bad.

What did he get for that cash, you ask?  How about a Yamaha receiver, Paradigm speakers, a Sanyo projector and a hundred and four inch projector screen, among others?

It’s a pretty sweet setup, and the fact that he built it a little at a time makes it all the sweeter.