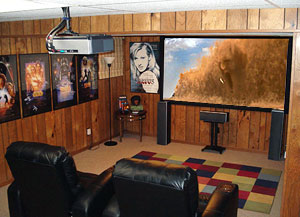 You’ve got to feel bad for Paul Hayes.  Guy moved to the United States from England, and you know what that means for a movie buff.  Yes, his entire DVD collection wouldn’t work in any hardware over here.

What Barack Obama discovered too late in his gift to Gordon Brown was that DVDs basically only work with the equipment in the area they were bought in.  That’s called a “DVD Region”.

So by way of making up for it, and considering that, a, his wife is as into movies as he is and b, he’s the owner / operator of a movie review website (even if he didn’t get how awesome Trick ‘r Treat actually was), he and his wife built a really sweet home theater setup in the basement.

He’s got a Sony Bravia projector in there, as well as a MTX subwoofer, Polk Audio speakers and a hundred and four inch screen.

Even if you don’t like his taste in movies, you’ve got to admit that the guy’s got a really sweet home theater setup.