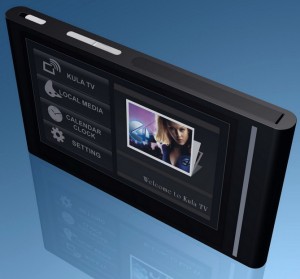 Taking their cue for their lack of design, Sungale has modified the Kula Portable TV that they had originally unveiled at the CES 2010. This is the same device that comes with a 4.3” touch screen display and a WiFi antenna to access streaming TV. What is new is its black design as well as a pop-up antenna for better WiFi coverage.

The Kula Portable TV also comes with a built-in 2GB memory and will work as a PMP as well in playing various media files such as movies and music. The new and improved Kula portable TV is set to come out this March with a price tag of $199.