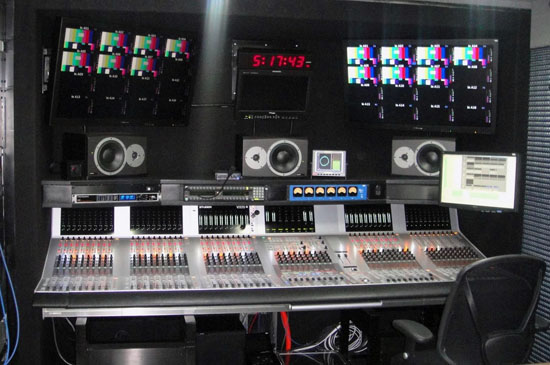 Several years ago at NAB 2002 in Las Vegas, Studer unveiled its Vista 7 digital audio mixing console – a desk that sought to improve speed and ease of operation through the introduction of a radical new operator interface, which the Swiss manufacturer named Vistonics. Designed for surround production and postproduction for TV, film, and music applications, the Vista 7 was subsequently joined by the Vista 6, which was designed for live broadcast applications.

Last summer, Studer introduced Vista 8, which combines many of the features of its predecessors, including both static and dynamic automation, and is optimized for live production in broadcast or performance applications.

A deceptively simple concept, the patented Vistonics technology must have other manufacturers kicking themselves and wondering why they didnt think of it first. By mounting four rows of channel rotary controllers and switches on a TFT screen, rather than around it, Studer was not only able to replicate the where you look is where you control operation of an analog console, with each functions associated legending and even color-coding, but also easily handle the inherent ability of a digital worksurface to reconfigure its functionality.

Not only does it focus eye and hand movements at the exact same spot, but it opens up new vistas — pun intended — in terms of associated graphic displays. In operation, Vistonics is as user friendly as a traditional analog console, and, since the display is on a TFT screen, Studer has been able to further enhance the consoles ergonomics through a logical color-coding scheme that associates parameter controls and icons: dynamics are green, equalizers red, and pan yellow. Function icons are similarly logical: levels are displayed as bargraphs and frequencies as XY graphs, for example.

Touching the desired function on a specific channel presents that function on the associated 10-channel wide Vistonics panel, allowing the operator to adjust the various parameters with the changing values displayed both graphically and numerically. Switching a function in or out alters the light intensity of the display accordingly.

But the display is not limited to a single channel or function. For example, selecting both dynamics and the equalizer on a channels touch screen brings up both displays, allowing the functions to be adjusted in relation to each other. Likewise, touching the EQ on two separate channels displays both on the same Vistonics panel.

All channels have access via the Vistonics displays to Studers VSP (Virtual Surround Panning) system, which was introduced on the D950 M2 console and is standard on all Vista models. Unlike a conventional surround panning system, which positions sources in the soundfield simply through amplitude adjustments, VSP incorporates algorithms that replicate head related transfer functions, those spatial and frequency clues to source localization.

If a signal is panned to the left channel, a listener hears that channel louder and slightly earlier with the left ear than the right. The source is also perceived as somewhat brighter by the left ear, as the head attenuates some high frequencies. By adding time delay between speaker channels, frequency response changes, and generating early reflections, VSP reproduces these variables to offer very realistic localization.

But its the center section – and its integration of Vistonics – that sets this console apart from its predecessors. Key to the consoles live production capabilities, the central Vistonics panel offers an overview of all console outputs with fast, direct access to those outputs. 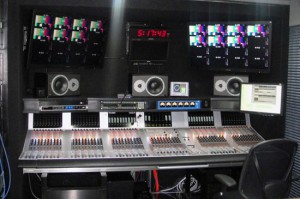 On Vista 8, the graphic controller screen, which provides access to setup, management, and routing, has been moved from the center section to a standalone screen, replaced by a standard 10-channel-wide Vistonics TFT. Ten freely assignable faders have been added below that, plus 48 meters above, maximizing real estate and thereby putting master level control of subgroups, for example, or of critical inputs, under the engineers fingers. With a 30mm channel pitch, theres a lot of control in a compact frame.

The operator has no need to move from the central position; while input channels can be scrolled or re-ordered anywhere within the console, the 10 central faders, which are isolated from scrolling, may control 10 additional channel positions from either side on four switchable page layers, putting control of 120 channels in immediate reach. There are also two grand master faders and the expected monitor functions, including 32 source selects, with available space for custom panels (for machine control, comms, GPIs).

Group, auxiliary, n-1 mix minus, and other outputs may be assigned via the center panel, where the 40 (four per channel position) rotaries give immediate access to levels, with related metering displayed. Each rotarys associated soft switch may be selected to mute, PFL or press-to-talk. Those 40 rotaries, plus 10 faders and the grand masters, provide 52 instantly accessible level controls.

The central operation concept is extended by the use of the Contributions button, which, when pressed, brings those inputs feeding the selected master output onto the panel, with level control, meter, and soft switch. With the Reduced View function instead toggled off, those inputs available for contribution are displayed, and each switch assigns the relevant channel to the selected master. Simple, easy to see, and very fast in operation.

On Vista 8, a Talk button can be used to speak with an n-1 output, while a dedicated switch on each input temporarily introduces an alternate input, such as a station ID, into the n-1 output. As standard, the console offers something that has been added as an afterthought to some competing consoles — the ability to multiplex n-1 members while off-air. Contributors from opposite sides of the country, for example, may be conferenced before going on-air, and levels set separately for off-air (fader closed) and on (fader open).

Matrix busses have been added to Vista 8 to enhance its live capabilities, and each has an n-1 contribution level control, allowing program or music to be multiplexed to the conference, also. For live work in theaters and opera houses, the matrix outputs may also be fed directly from inputs, not just masters. Eight mute groups, expandable to 16, are also provided for live work.

In addition to being bootable into dynamic, timecode-based automation, Vista 8 alternatively offers static scene automation for live use. Entire channels may be isolated from scenes, or a filter mask applied to lockout certain functions or subsections of functions (for example, one band of EQ) from a snapshot scene change. The expected Previous and Next buttons allow scrolling through stored scenes before selection.

In live situations things can and will go wrong, so 100 percent redundancy is available. Not only is DSP offered with full backup, but the surface may also be switched to a second control system, retaining the latest settings. The graphic controller screen constantly indicates total system health. A front-panel USB port accepts a memory stick to save setups or carry them between consoles, with CD backup also available.

The Vista 8 is a well thought-out console for live applications, whether in broadcast or performance venues. Although the Vista series is less well known in the U.S. than other homegrown digital desks, Studer has put the wheels in motion to change that, not least through the products role in Harmans recently announced HiQnet communications and control protocol. Sales worldwide are already approaching 30, including one to New York-based All Mobile Video — the largest Vista 8 built to date and also the 100th Vistonics console off the production line — and two to a Hispanic TV network in Florida. Nearly half of the Vista 8 desks shipped have gone to performance venues, such as the Shanghai Oriental Art Centre, which purchased three, as did Hungarys Palace of Art. Were sure to see them in increasing numbers in the U.S. over the coming year.