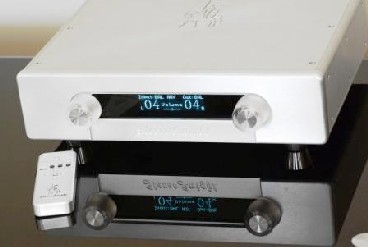 I’ve had an obsession with passive preamplifiers lately. I do not know whether it’s the simple nature of them, the path of least resistance, or the fact that I like class A solid state amplifiers and I feel that those two designs have synergy together; not to mention I don’t need a second component sucking juice next to the class A bias. I had heard of Stereo Knight a few times before as I had seen one of their passive preamps floating around the HIFI classifieds. Along with their current line up of four passive preamplifiers, they also have three vacuum tube driven preamplifiers that use the same transformer attenuation technology, and KT88 tube integrate amplifier and pair of 100wpc tube monoblocks. When I got the opportunity to review a rather unknown passive preamp, the Stereo Knight Ultimate Magnetic Silverstone B&R, I definitely jumped at the offer.

What’s in a name? Well, a number of hints if you are the Ultimate Magnetic Silverstone B&R. The “Silverstone” is Stereo Knight’s current line of passive preamplifiers. They make a number of units from a traditional single in single out to the pinnacle B&R with power switching; all available in balanced, unbalanced connections, or both. The “Magnetic” piece of the name refers to the fact that the volume attenuation system in the Silverstone line of preamplifiers are magnetic transformer based attenuators (85% nickel Permalloy core); the “Ultimate” version that is silver wired. With traditional passive resistor based attenuation systems, the impedance usually increase while the resistance also increases, making it more and more difficult for the source to drive the amplifier. The transformer based attenuator however is designed so that as the attenuation increases, the impedance decrease to provide a much easier load for the source to drive. Plus, four transformers are used for full and true balance signal attenuation since each channel has two pairs or conductors for the signal; ground + plus and ground + negative. The last part of the name is the “B&R” piece. The B represents that the preamp uses balanced inputs and outputs, and the R represents that the preamp has a remote control to control its functions.

The design of the Silverstone B&R is fabulous, and its implementation works just as well. With its sleek, silver, all aluminum alloy body and black LCD display, the unit not only tips the scales at a meaty 25lbs, but tips the scales of my heart with its easy of use and great features. The Silverstone B&R is easy to control with either the remote control, or by hand, and its simple controls are all one could ask for. Switching the inputs and outputs is done easy enough with the aluminum alloy remote control as each in and out is labeled on a separate button. The volume can be controlled by the pair of knobs on the face of the Silverstone B&R or a set of buttons on the remote. Thank you Stereo Knight for equipping the Silverstone B&R with the ability to adjust the left and right volume channels independently or together. I know that I have rarely needed separate left-right volume adjustments, but the few times you need it, there is no other replacement for it. This is a rare option in components these days, but one that makes all the difference and allows you to have ultimate control over the sound of your stereo rig.

My only gripe with the Ultimate Magnetic Silverstone B&R preamplifier is this, since the unit is a passive one, all of the wiring in it is straight. This translates to the Silverstone B&R only passing signals from balanced in to balanced out, and the same on the unbalanced side. However, this does only effect the ultimate functionality of the unit in the broadest market possible as most users will be wiring their stereo rig either completely balanced or unbalanced; and that is my recommendation. If more flexibility is required, an upgrade to the Magnetic Enigma-1.0R is always an option which uses the same volume attenuation transformers as the Silverstone B&R but with 6922 tube signal amplification. Since the Magnetic Enigma-1.0R, is an active preamplifier, balanced and unbalanced can be switched interchangeable in and out.

The first time I plugged in the Ultimate Magnetic Silverstone B&R, I did not know what to expect. I had heard passive before, not with transformers, and definitely not with silver. Configuring the unit was easy as pie as all I need to do was plug in the interconnects and push corresponding buttons on the remote control. After I allowed the unit some time for burn in, I sat down for my first listening session. The first CD to take a spin was the ever seductive Nora Jones. Her voice was very full and her breath very real and close. On the track “Turn Me On” off of Come Away with Me, her piano is off to her left in the sound stage and its soft quality echoes through the sound stage. The longer I listened to the album though, I started to realize that the sound I was hearing was not too different from the sound I had been listening to before on the Jungson. I was originally hesitant about using an integrated amplifier to demo a preamp, but I become quickly thrilled by the combination because it allowed me to compare the direct effect of adding the preamp to the sound while maintaining the same volume; a control for you science types. After listening through “Lonestar” off the same album, I was sure that what I was hearing was very similar to Nora’s non-Silverstone B&R sound. Again, her voice was captivating and airy, while the accompanying bass drifted through her with its woody and soulful tones. Of course, there were little differences here and there in the sound between the Silverstone B&R and not, but I would not classify the nuances as helpful or hurtful attributes in the overall sound, just slight differences that made me marvel at that block of aluminum alloy in front of me. 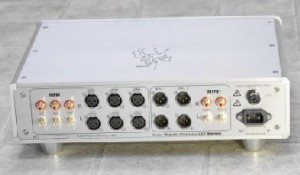 The second CD that found its way into my ears was Collection by The Coat, a Northwest a cappella group. First out of the gate was their track titled “Don’t Bring Me Down”. As this foursome filled my room with sound, the first thing I noticed was the body of their voices. Not only did they sound four wide in the sound stage, but each of their voices was solid and very fleshy. Once again, I had heard this sound before, and it was pre-Silverstone B&R. By the time I got to “Rawhide”, I was bouncing in my seat with glee as those gentlemen performed song after song in very natural tone with all the required dynamics. Whether Nora Jones, The Coats, or Szell, the Ultimate Magnetic Silverstone B&R is a nicely transparent and musical preamplifier that will not screw up your music.

The Magnetic Silverstone B&R line of preamplifiers starts at $1895 for the copper wound version and $2550 for the Teflon coated silver wound version. That is a bit of money to pay for silver wiring, but for those who ascribe to the religion of silver, and I’ve been meddling lately, it’s a worthy upgrade. Plus, $2550 is a fair price for a company’s premium, silver wired, passive preamplifier with electronic switching and a LCD readout screen. Add in a sound that is crystal clear, transparent, and distortion free, and you have a preamplifier you can write home to Ma’ma about. If you are willing to take the leap into transformer based attenuation systems and have the rest of the equipment to back up your preamplifier, Stereo Knight has the product for you.