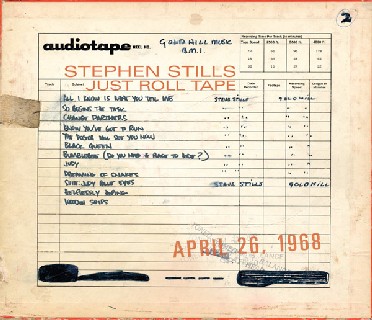 This LP, which is very much worth owning, is desirable for reasons that are, perhaps, different from those of other LPs that I’ve reviewed recently. More than new issues, or reissues, Just Roll Tape is a historical document. Classic live concerts (Woodstock, various Grateful Dead concert issues) come close to this LP in terms of their importance, but for those of us who grew up listening to Crosby, Stills, Nash and Young, this LP is a revelation.

Stills’ liner notes tell us what we need to know:

“I was at a Judy Collins session in New York in 1968, and when she was finished, I peeled off a few hundreds for the engineer so I could make a tape of my new songs. Some you’ll know; some you might not. The following fall we made the first CSN album, and the tape has been lost to the wind for almost 40 years. Somehow it’s found its way back, and these songs now feel like great friends when they were really young.”

The “somehow” is the astonishing reality that the tape ended up in Graham Nash’s hands in 2003, and that Stills was eventually prevailed upon to release the tape as an album (first in CD format in 2007).

Be aware: These are not highly-produced numbers. Au contraire, they are simply Stills’ voice and his guitar (and dobro on “Treetop Flyer”). He doesn’t always sing in tune. Sometimes you can’t hear his voice properly over the guitar. Sometime you hear the tape saturate. Sometimes the song is truncated early and you hear the tape distort. Polished this is not. But the album has authenticity, honesty and sincerity in droves.

Listening to it for the first time was akin to finding a cache of my friends’ childhood photos. So this is what they looked like when they were young! It’s an album that shouldn’t be played in the background (though I suppose it can be). It rewards close listening. There are many standout tunes—and not just the old chestnuts, though I was particularly taken by “Change Partners” and “Suite: Judy Blue Eyes” (oh, did I mention that Stills was “involved” with Judy Collins in 1968 when he was 23?).

The LP was cut from a digital master, and Bernie Grundman was the mastering engineer. He’s done a wonderful job; the LP sounds as good as I can imagine possible. The package (a gatefold, matte-finish card stock) is beautiful, and the liner notes provide useful information about the recording and remastering. The vinyl itself was flawless: Heavy, flat and unscarred. As noted above, this is a wonderful album, both for the music and for the historical significance. Strongly recommended.