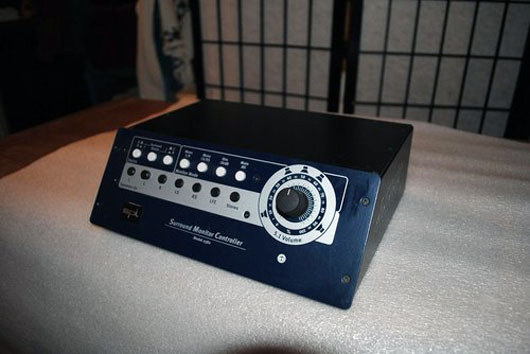 All surround monitor controllers are not created equal. After a beginning where the few on the market shared pretty much the same features, we now enter into a period where the market has now become stratified on both features and price. And while most surround monitor controllers available today tend to be on the rather sophisticated side with lots of bells and whistles with a price to match, there has always been a crying need for something simple intended primarily for DAW use. Well-known German manufacturer SPL  who is no stranger to the surround marketplace with products that range from the ATMOS 5.1 mics to the MMC console  has been listening to the marketplace apparently, and has introduced the model 2380 SMC to meet the needs of the DAW surround masses.

The SPL 2380 SMC (short for Surround Monitor Controller) is a simple 5.1 and/or stereo analog controller with enough functionality to get the job done with a minimum learning curve. The unit is small in size (4 x 11 x 9 inches approximately) and weight (5 lbs.) and designed to sit on a tabletop or desk rather than in a rack. The controls are simple; theres a master rotary level control (calibrated in percentages) that is unusual in that it performs this task via a discrete multichannel potentiometer rather than the more common VCAs or MDACs. This high-quality pot was used intentionally for audio quality since VCAs and MDACs can be sonically degrading, which is not something that you want on a monitoring device.

There is a Speaker On push-button selector switch for each of the 5.1 monitors, as well as one for a separate stereo path, and similar switches for Source switching and Monitor mode. The Source section allows monitoring between either the surround or stereo input and output of the SMC. The Monitor mode allows you to sum either the Left and Right front monitors to mono, the Left and Right surrounds to mono (a somewhat unique feature), a 20 dB Dim button, and a Mute All button.

There are a variety of connectors on the rear panel, but it all starts with two DB25 connectors (TASCAM pin-outs) for the main 5.1 and stereo input to the box from your DAW. The second DB25 is a slave output for connection to a mixdown machine if needed. Speaker outputs are on a set of eight TRS jacks for both the 5.1 and the stereo speaker output. A set of RCA jacks for 5.1 playback (called Input B) and a stereo pair of RCAs (Input D) complete the I/O. This means that the SMC can switch between two stereo and two surround sources, as well as two speaker sets (one 5.1 and one stereo). A standard IEC mains input jack for power and an On/Off switch completes the rear panel. 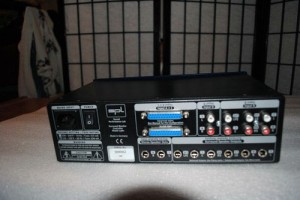 A somewhat unique feature of the SMC is that all rear-panel I/O graphics are labeled to be read either looking straight on from the back as one would normally expect, or as you peek over the top as you operate it. This is pretty cool when you want to connect something quickly without having to pull everything apart just to see which jack youre connecting to. The manual is pretty complete, explaining the operation and I/O of the unit succinctly. As one would expect, the analog unit has some specs that measure far beyond that of most digital units, with a bandwidth out to 100 kHz at +18 dB output (max is +22, according to the manufacturer).

In Use
Theres something of a throwback feel to the SMC with the pushbuttons and rotary volume knob  as well there should be since it is analog. While maybe a little foreign to some newer DAW jockeys, some of us old-school guys still enjoy controls like faders and especially rotary volume controls (nothing gives you the feel of a big console like a rotary control room level control). But like an old-school console, Im not sure how long the pushbutton selector switches employed in the SMC will last (although Im told by SPL that theyre rated at over 100,000 switching cycles), and I wish that anything intended for pro use would not use RCA jacks in any capacity, though these jacks are intended for DVD player playback and are calibrated to 0 dB instead of the normal 10. That being said, I must say that the unit worked well and sounded really good. Its quiet, its easy to use, and I swear that the extended bandwidth makes a difference even on 48 kHz sampled, band-limited workstation material.

Theres been a need for a unit like this ever since surround became a serious feature on DAWs, and the SMC 2380 fills the bill nicely. Even though it might be aimed at the DAW crowd, I can definitely see this unit finding its way into other applications that require a simple, inexpensive yet good sounding controller.