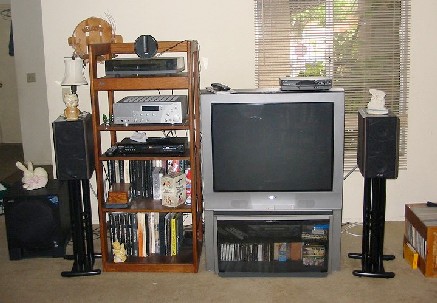 I wish I had a picture of it, the record changer in the big, maple-finished Zenith console “Cobra-Matic” stereo. This lovely unit, with a tonearm that looked like a snake, was the centerpiece of my family’s living room and the machine that allowed me to first start appreciating music – albeit the Three Stooges!

Even at that tender age, I knew I wanted more, and as I grew up, a sort of quest began. My first marriage began with a gift for my own home, a not-too-shabby little Sears “Silvertone” record player, with detachable speakers – not quite a toy, but not exactly sonic nirvana, either.

Along about 1970, I heard my first “real” stereo, a friend’s Dynaco-based rig. It was my first exposure to some semblance of “high fidelity.” The hi-fi bug had bitten!

Speakers, of course, are the most important part of any setup – they’re the “voice” of the system. So, if you’ve got a few minutes, kindly accompany me on a 25-year loudspeaker odyssey – those that I have owned, in chronological order, and why (followed, of course, by why not):

There used to be a really nice high-end store in Beverly Hills, Calif., near where my aunt lived. Jonas Miller Stereo. The kind of place where Jonas himself would appear and help you out. I saw a newspaper ad featuring a complete system at a bargain price (Harman Kardon receiver, Garrard 55-B turntable) along with single-driver Altec floor-standers. Spent a few extra bucks to have a crossover and horn tweeter installed. Nice. They’d play loud, but I didn’t like the horn. Too little detail. Jonas Miller took the Altecs in trade for a speaker then being marketed by GTE and carrying the Sylvania brand, a bow, no doubt, to the olden days of TV and other electronics. These were 12-inch three-ways and sounded pretty good. They certainly took a licking and kept on ticking as I moved around the country a bit.

I guess I wanted a name brand at that point, so I stuck the GTEs in the closet and bought some JBL L-40s, the two-way 10-inchers with those glorious orange foam grills. Bought them from University Stereo, anybody remember that chain? Cool! 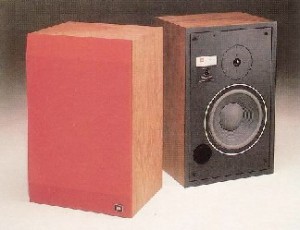 Grrrr. The JBLs were sweet in the high end, but not enough oomph. (This was during a sort of “How loud can I play rock and roll without getting thrown out of my apartment?” period.) Sold them and plunged for some then heavyweights, the fat and very bassy (and now semi-legendary) Realistic Mach Two’s. 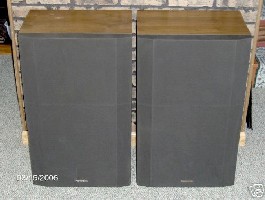 When The Child came along, it became obvious that floor-standing speakers weren’t going to cut it. He kept running into them, threatening to poke out the woofer. This was where I fell for a novelty, unloading the Mach’s and downgrading to Bose 301’s. They would sit on the end tables, I figured, high enough to be out of reach of the babe.

Truthfully, fire your flames if you want, but these guys didn’t sound too bad, especially in the midrange. But I didn’t have exactly the right room for the patented “Direct/Reflecting” sound, and I was again faced with the lack of bass.

Enter Circuit City’s trade-up plan. The Bose went back, replaced by an AR satellite/ subwoofer system, the exact model number of which I can’t recall. Two small satellites and an 8-inch sub, and this was a really satisfying setup for several years. Even hung the small speakers on the wall for a time (bad idea, incidentally). Amazingly smooth response from the tiny satellites, and just enough boom from the sub to satisfy. 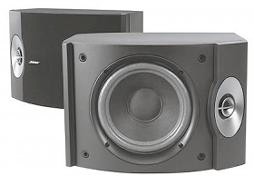 Somewhere along the line I blew out the AR sub. Rattle, rattle, rattle. Watering the lawn one day in the front of the duplex we’d moved into, guess who shows up? Yes, I’ll admit it, the dreaded White Van. Yada, yada yada, and a hundred or so bucks later, I am the “proud owner” of a pair of “Acoustic” 12-inch, 3-way, “white van” speaks. All I can attest to is that they played loud, and didn’t break. And they got me by for a time. Later on, I gave the “white van” speakers to a niece to sell at her yard sale, and entered Polk Land with the RT-800 towers. These were delightfully warm speakers with a slender, stylish look.

But. Soundstage? What soundstage? My room requires that speakers tightly abut a big TV and equipment rack, and I wanted more “air” around them. The Polks were sold on eBay, replaced by a pair of well-regarded black beauties, the Paradigm Mini Monitors. Perched on the recommended Premier stands, I definitely enjoyed more “positioning” of instruments.

I’ve had several subs on and off, but the room suffers from standing waves. While the Minis aren’t particularly bass-shy for a small monitor, I just couldn’t get enough low end from my listening position, even with a 12-inch, corner-placed sub, or a smaller one installed on the bottom shelf of the equipment rack. (Never tried bass traps or other room treatments. Maybe I should). So out went the Paradigms and in came what I hoped would be a sort of final solution: the monolith-like Polk Monitor 70s. Bass? Yes, much better, but man those big guys are bright! All those drivers produce an almost overwhelming, “in your face” effect that was just too much for my smallish room. Others like ’em, I know, but they just weren’t to my taste, particularly since the years have led me to more quiet, introspective listening, mostly small-group jazz and a LOT of classical.

What now? For years (particularly as a Polk fan) I had ogled the company’s upscale line, the LSi series – sort of rooting for Polk to finally overcome its “big box store” image and penetrate the often effete and snooty audiophile community. I read review after favorable review (including the one right here!) and finally trundled down to Tweeter. I was hooked. I brought the LSi9 bookshelf speakers home. These heavy, perfectly sculptured ebony beauties now rest nobly upon the Premier stands and produce the sweetest and most convincing sound I have ever heard from my listening chair. It’s tempting to call them a “classical music” speaker, since their smoothness and transparency are particularly suited to strings, piano, etc. But everything sounds good, and that’s how it’s supposed to be. I agree wholeheartedly with the reviews that have marveled at the bass response. I don’t even switch on my sub 90 percent of the time. At 4 ohms, even driven by the beefy Outlaw RR2150 receiver, they’ll strain a bit if you crank them too far, but this is certainly no “party speaker.” It reproduces the subtleties of music more faithfully than any speaker I have ever heard.

So there. I’m content for now. I don’t expect the upgrade bug to bite again for a long, long time. Maybe never! 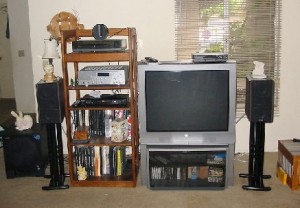