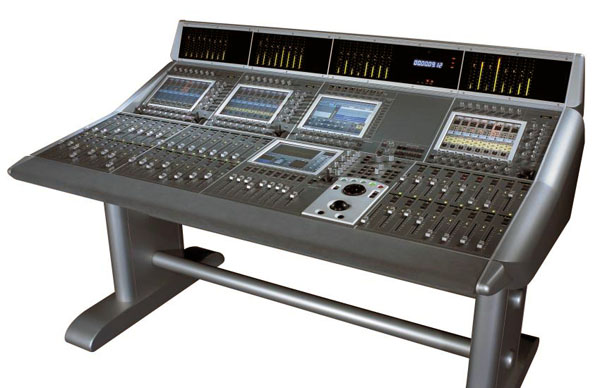 The launch of a new product at a tradeshow is frequently met with healthy skepticism. We’ve all been there; it’s vaporware or, at the very least, a prototype that will take months to come to market, undoubtedly with major revisions.

But that is most definitely not the case with the Soundtracs D4, the very latest in a growing line of digital audio consoles from the company. Making its debut at NAB 2001 in Las Vegas this past April, representatives from the U.K. manufacturer and Fairlight, the exclusive North American distributor, reveled in the fact that they arrived at the show with eight D4 orders from customers on both sides of the Atlantic already in production, including four for Henninger Media Services in Arlington, VA and two for Valkeiser in Holland.

Even more impressive is that the D4 is Soundtracs’s most ambitious and expensive digital desk to date, a flagship product that is sure to further establish the company as a major player at the high-end of the market. A natural progression from the Virtua, DS3, DS-M, and DPC-II, the D4 builds on the functionality of its predecessors, retaining the now-familiar touchscreen operation and exceptional automation system, while also incorporating a good number of enhancements to both software and hardware – many of them suggested by customers. The company boasts of an installed base of over 400 digital consoles worldwide.

Proudly displaying its lineage while also taking the Soundtracs digital console pedigree to a new level of sophistication, the D4 is perhaps best reviewed in terms of the features that differentiate it from the line, and particularly its closest relative, the DPC-II (reviewed in Surround Professional, December 2000). Certainly there is insufficient space here to do the comprehensive Version 2 automation software justice.

The D4 takes onboard some of the cosmetic detail of its elder siblings, most noticeably the silver-colored trackball/jog wheel/transport key panel and touchscreen trim of the DS-M and DS3, and the overall look and feel of the console has been brought into the new millennium. Gone are the traditional Soundtracs battleship gray paint finish, drab trim, and functional floorstand, which have been replaced with sleek silver trim, elegant lines, and a very solid and expensive demeanor befitting such a top-of-the-line product.

The two-tiered control surface of the DPC-II has subtly evolved on the D4, with the upper section, which houses the input channel touchscreens and controls, raked at a steeper angle and offset slightly below the level of the fader panels at its forward edge. And those touchscreens! New digital graphics cards and TFT screens have resulted in greater clarity and legibility; the onscreen graphics fairly pop out at you.

The steeper rake of the upper section not only keeps the furthest controls closer to hand, but also allows for a larger meterbridge without presenting a significantly higher console profile. The D4 features 106-segment tri-colored LED meters, with selectable ballistics, which may be separately switched in banks of eight to read

Stereo inputs show up as a horizontally stacked pair of bargraphs. The timecode readout, positioned above the transport controls on the DPC-II, has been relocated to the meterbridge on the D4. A DK meter or reverb remote can be fitted in the available blank space in the master section.

The D4 can be configured in frame sizes from 16 motorized faders, which are double-stacked on each 8-channel section, to 96. The console uses Soundtracs’s new, more powerful digital engine (which is also retrofittable to the DPC-II) and, with two engines fitted, will handle a staggering 320 inputs. The increase in DSP means that where the standard DPC-II offers 40 busses, of which 20 may be assigned as aux sends, the D4 provides 124 output busses as standard, 28 of which may be allocated as mono or stereo auxes.

The main output busses can be configured simultaneously in multiple formats, including stereo, LCRS, 5.1, and 7.1. Divergence control and a dedicated subwoofer feed are included, and busses may be routed to direct outputs, pre or post fader. All output busses feature a limiter with release and threshold controls. There is no need to assign DSP to inputs or outputs, and, consequently, no risk that you will run out of horsepower on any channel, as EQ and dynamics processing is permanently allocated. Like the DPC-II, multiformat monitoring can be defined via the 40×8 matrix, and sources can be mapped to three monitor outputs in a mix of formats. Monitor switching can toggle between setups that may also include user-definable macros.

The system uses the same input and output rack hardware as the DPC-II, which may be configured in blocks of eight to accept analog mic/line, AES/EBU (with sample rate conversion), TDIF, S/PDIF, and MADI signals. According to Soundtracs, they were the first manufacturer to implement 96 kHz in a digital console; with the D4, they have raised the bar by allowing 48 kHz and 96 kHz sample rates to coexist in a single project. As is the Soundtracs way, each input section touchscreen provides access and graphic feedback for 16 channels. Rotary controls and switches around the screen, plus a single joystick panner, provide hardware control of the functions selected by the operator. It’s an elegant and intuitive way to work.

In response to user feedback, the D4 now introduces the Platinum Channel, which gives the engineer total control of a selected input channel from the master section. Hardware controls have been added around the two master section screens to mimic the input functions, which were only partially duplicated on the DPC-II. The new feature goes a step further; touch the selected input’s small EQ or pan display on the upper screen, and a larger, more detailed graphic opens on the lower master section screen. Input channel EQ can be dropped in or out against timecode or cue points, and may now be selected or deselected from automation control via a hardware switch. Next and Previous switches have also been added for the snapshot function, which automates anything from a single switch on a single channel to every function on every channel. Snapshots can be previewed, and channels can be excluded from a snapshot on the fly. Input channel and master sections can be ordered anywhere within the console frame, and there is an option for 19-inch bays to be incorporated. Multiple D4 consoles can be cascaded for film or other operations requiring up to 640 input channels, but any console can be split in software for two-man use at any position on the desk. In two-man mode, the automation allows the left- and right-hand passes to be worked on separately.

Multi-room and multi-console setups are additionally catered to through Soundtracs’s new NETRACS inter-console file exchange system, MADITRACS, a new networking and system security environment, and SAFETRACS, offering audio output continuity. The new networking options include the ability to backup data to a central server at specified intervals or a set daily time.

Soundtracs pride themselves on speaking bluntly and honestly to existing and potential customers. A digital console, they say, will crash at some time – they all do.

For live applications, such as remote or OB trucks, the key is how you recover from a crash. At the NAB show, James Gordon, Soundtracs’s U.K.-based digital sales manager, was more than happy to demonstrate how the D4 handles the three basic crash scenarios. An engine restart takes but a couple of seconds and a worksurface restart less than five seconds. But, most importantly, a full system reboot, which takes perhaps 40 seconds, does not interrupt the audio.