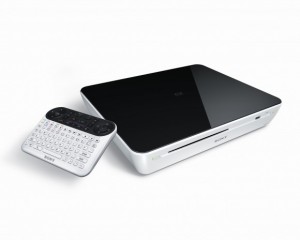 At the same time that the Google TVs were announced, so was the Sony NSZ-GT1 Blu-ray Player that offers a good set of features, including a few USB ports as well as an HDMI input and output.

In case you don’t know the Sony NSZ-GT1 will be the first player that works with the Google TV, and comes with a Sony QWERTY keypad remote and WiFi.