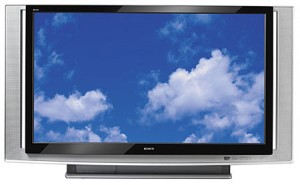 This stand-mountable set (a suitable stand is available as an option) isn’t exactly svelte. At over two feet deep, it’s more like your grandfather’s CRT RPTV than those hang on the wall flat panel designs that are so popular today. (If a 70″ flat panel is a must, bring deep pockets- Sony’s new 70″ LCD costs $33,000!).

With its removable speakers in place, this 70-inch XBR2 set is just over six feet wide. Without them, which is how I reviewed the set, it’s a “diminutive” 67 inches. The width of the screen area itself is about 60 inches, which is smallish by front projection standards but still a good-sized screen in most rooms.

As mentioned, this set isn’t cheap. But there are some technologies that separate it from the competition. It uses Sony’s well-established SXRD technology, featuring a full three-chip design with a native 1920×1080 pixel count. The 1080p DLP RPTVs currently on the market are single-chip designs using a color wheel and some sleight of hand to use a 960×1080 chip to put 1920×1080 pixels on screen. Also, the KDS-R70XBR2 (hereafter referred to simply as the R70 to delay the onset of carpal tunnel syndrome) includes every feature known to Sony.

Advanced Iris is Sony’s name for its various iris settings, including two automatic and two dynamic modes. CineMotion is a film mode that applies inverse 3/2 pulldown for film-based sources. Twin View is split screen for watching two programs at the same time (though only one can come from the set’s single onboard SDTV/DTV/HDTV tuner). The set is also CableCARD-ready.

There are more than enough inputs for most requirements, including three HDMI jacks. They are not HDMI 1.3, however—a point we’ll probably have to start making clear since the first HDMI 1.3-ready sets are trickling into the market.

The R70 will accept HD signals up to 1080i over component and 1080p over HDMI. It will also accept both 1080p/60 and 1080p/24. But it converts incoming 24fps sources to 60fps, adding 3/2 pulldown. This is a limitation common to many displays, and it essentially eliminates any advantage that might be gained from using the 1080p/24 output of a high-definition disc player.