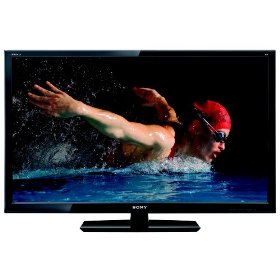 So once again, Sony steadfastly refuses to disappoint me, putting out a high quality television system that feels a lot bigger than it looks and generally provides value like no tomorrow with the Sony KDL46XBR9.

The Sony KDL46XBR9 television is a forty six inch 1080p LCD television with Bravia Link and Bravia Sync technology, a networked TV guide program, and a superabundance of ports, including four HDMI inputs, one HD component input, one HD combination input, and one PC input.

This one is a lot like an earlier model we covered here, the Sony KDL46Z5100, in that it too has a beautiful picture and very fine sound quality.  The interesting departure from that earlier Sony is that this one actually manages to FEEL like it has just as big a picture as the KDL46Z5100, but in a slightly smaller overall unit, giving you the feeling like you’re saving on space yet not needing to compromise on picture quality.

Ordinarily, this retails for about twenty six hundred bucks but Amazon’s actually knocking just over a grand off the price bringing this down to just over fifteen hundred.  And even though that’s a pretty big price tag, you’re still coming away with incredible value.