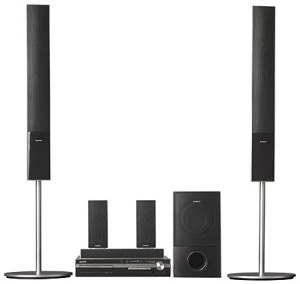 The DAV-HDX500 is an HTiB built around an all-in-one receiver/DVD changer that Sony generously rates as putting out143-Watts per channel (x 5) plus an additional 285-Watts for the subwoofer – but that’s at 10% THD. The receiver/DVD changer includes an AM/FM tuner, auto speaker calibration, and an HDMI output with upconversion to 720p or 1080i. There are inputs for an additional A/V source, an audio-only source, and an optional XM satellite radio antenna. Two Digital Media Ports on the back allow you to connect Sony Digital Media Port accessories, such as a Bluetooth Interface ($80) or a Walkman cradle ($50), both of which are currently available. Future accessories will include an iPod Dock ($100) and a Wi-Fi Client ($200). That’s a pretty impressive range of features and inputs for a sub-$500 HTiB.

For years, one of Sony’s strong points has been the industrial design of the gear it makes, and this HTiB is no exception. Rather than incorporate a standard flat front faceplate that looks both boring and cheap, Sony chose to endow the DAV-HDX500 with a cool-looking, split-level front panel. The main display is visible on the recessed top half while the DVD drawer, transport buttons, and volume control are located on a silver strip that extends outward about half an inch. Although the buttons are small, they’re spaced well enough apart from one another, making it very easy to operate the system without the remote control.