The wonderful thing about the free enterprise system is that so many times new ideas come from the newcomers to an industry. It forces the rest of the industry to stand and take notice. In a few cases, it even motivates a few old school companies into renewing their R & D programs. With the advance of wireless technology beginning with cordless phones, then cell phones, followed by WiFi the groundwork was laid. Some companies such as Apple expanded on this technology with products such as Airport Express. But no company had put the whole package together involving wireless, multi-room sound.

That is until Sonos came out with its Digital Music System. Using the concept of wireless broadcaster/receivers, Sonos took the next logical step, connecting the stereo system to the transmitters. In doing so, Sonos has unleashed the power of audio equipment to points throughout the home, minus a complete umbilical cord of wires. 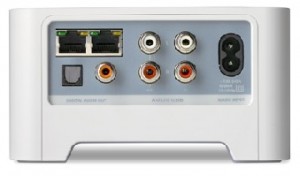 In late May a box from Sonos arrived, in it were 2 ZP80 transceivers, known as “Zone Players”, a ZP100 Amplified Zone Player (50 wpc), and a CR100 remote with cradle. For this reviewer, Sonos also sent along a 200 gig hard drive full of wonderful music. Wanting to avoid grading papers, I went about opening the boxes and examining the various pieces of the system. My first impression was how impressive the fit and finish was for so young a product. Many times in audio it takes a generation or two for the finish quality matches the technology. No so with the SDMS. The rounded vertical corners and silver with white trim made for a subdued elegant look, reminiscent of Scandinavian design.

The ZP80 is very similar in size (a bit smaller) and looks to the Mac Mini computer. The front face is silver with a slim, vertical rectangle holding two buttons, a square mute, and rectangular volume up/down. Between them lies an LED light that shows white when powered. The mute button turns green when activated. The backside demonstrates a well-thought out recognition of the needs of both the typical audio fan and the 21st century techie. In two horizontal rows across the back sit a pair of Ethernet jacks, then, not one but two RCA left jacks (in and out), and finally, a vertical power cord receptacle. The second row begins with an optical input, then a digital RCA, and the two matching right RCA jacks. There is no power switch. The antennas are located inside the box in diagonal corners.

The ZP100 amplifier is identical to the ZP80 only larger, nearly double in all measurements in order to contain the amplifier. Just eyeballing the box I would estimate that the amplifier looks quite similar to that of the Audioengine5 speakers I reviewed in the July 2006 issue. The visual difference between models lies with the back panel. Four Ethernet connections, left and right post-style spring load connectors go across the top half. The lower half consists of the subwoofer RCA, then the standard in and out RCA jacks. No optical or digital jacks on this model. Finally, a three-prong power cord with a voltage switch, for usage in different countries.

The final piece is the CR100 remote, a handsome, iPod inspired device with a few extra buttons. Identical to the front panel of the Zone Players is the vertically aligned mute, then volume up/down buttons. A very sharp three-inch square color display can show a variety of sub menus. Below the screen are three thin, silver buttons that assist in menu selection. Along the right side sits the Zones button, Return/Back button, and the music button. Below lay the iPod dial interface, which replicates many of the iPod’s capabilities. Finally, under the dial are the three music control buttons, Reverse, Play/Pause, and Fast Forward. The remote has a nice, ergonomic feel in one’s hand, as its size is similar to that of a thin paperback novel. 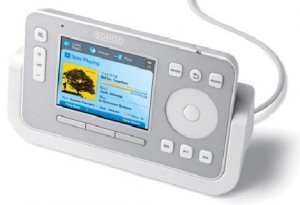 Getting the first Zone Player connected was quite easy, no different really from any other piece of audio equipment. However, getting it to recognize my iPod took the better part of a half-hour. I made the mistake of connecting one Zone Player in my office, then connecting another Zone Player to my main stereo system. After disconnecting the office, and resetting the system all was well.

A few weeks later, I decided to set up the ZP100 amplified unit in my family room and connect them directly to my Totem Dreamcatchers. Part of the reasoning was marketing our home for potential buyers. I thought having music playing in multiple rooms would add ambience. The ZP100 was placed on top of my entertainment cabinet some 62 inches off the floor and toward the back wall. From the main ZP80, is a distance of some 37 feet, the kitchen wall separates the two rooms with a 40-inch wide passage way between rooms. Since I don’t keep music on my computer I chose not to set up the second ZP80.

I really expected the SDMS to easily connect the Zone Players and stream music. However, in my case this was not to happen. The ZP100 struggled to pick up the signal from the ZP80. After almost two hours of going through software menus on the remote, checking wiring, and finally moving the ZP80 from the sofa table to the love seat that sits just in front of it and facing the unit towards the family room, the ZP100 finally was able to capture the signal.

Unfortunately, my troubles were still not over. The CR100 remote would not at first let me access the proper menu once I had selected zone for the family room, that of “Music Menu”. Instead, it kept kicking me to the screen showing what was playing. Only after repeated attempts did the remote finally go to the proper screen. Once in the proper sub menu, adding the ZP100 to the living room as an access point was easy enough. However, actually getting it to play music turned out to be a maddening proposition every time I used it. 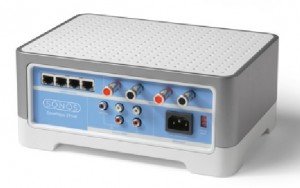 Once I did get the signal streaming, the SDMS turned out to be a fine performer in all but one instance. The sound is pleasant, but slightly compressed in audio quality. This is not surprising; as for the broadcast to work the music must be compressed. It’s still better than listening to FM radio, but it’s not pure source quality either. The ZP100 did drive the 4 Ohm Dreamcatchers without issue, but I never pushed the amplifier by any means. One very nice feature of the SDMS is the slow volume up feature after muting. Say for instance, you were listening to an old favorite from your high school days and kept pushing up the volume. Then the phone rang and you mute the system. After finishing the call, forgetting the fun you were having, you release the mute. Normally, you’d get blasted into the next room. Not so with the SDMS, as it slowly ramps back up the volume, giving the listener time to grab the remote and adjust the volume downward.

I have a tendency not to stay seated for very long under normal circumstances as life has a tendency to keep me moving. The best part of the SDSMS, is how nice it was to move from room to room and not miss any part of the musical experience. I hate it when a particularly favorite part of a song is playing and I have to run out of the room. With the SDMS, that was no longer the issue. I appreciated the ability to have separate volume controls for each zone. Different size rooms and speakers require individual controls.

Another nice touch is ability to access music files from an internal, or external hard drive. Sonos was kind enough to send along a 200 meg hard drive filled with every musical genre. I found myself listening to music I hadn’t heard in years. The 21st century converges with audio once again.

For all the niceties, I found a couple of issues that sadly keeps me from endorsing the SDMS at this time. One is the poor reception quality. With the distances that wireless routers, access points, and cordless telephones can reach, there is isn’t any reason that I should have had such trouble capturing a signal only 40 some-odd feet away. The forum section on the Sonos website suggestion was adding an extra ZP80 which can be setup as a range extender. The capability is nice, and easily set up, however, at $299 that is way too steep. Instead, I suggest two simple things: One, that Sonos add an external antennae (same style as wireless routers). Although not esoterically fitting with the Zone Player looks, it would undoubtedly improve the signal strength in both directions. Secondly, add a separate range extender at a price point under $100. This would allow for much easier connection especially when longer distances or floors is involved.

Another disappointment was the lack of followup documentation involved secondary capabilities. The struggle I had in getting the ZP100 setup and working (for the past 8 years I have been a school technology coordinator in addition to my teaching duties), was compounded by the lack of detailed written documentation. It seems as though what I was trying to do was not out of the ordinary, so I suggest that Sonos add those directions to the backside of the big setup card provided along with the smaller instruction booklet.

Sonos has a wonderful concept in mind with the SDMS, by correcting the flaws that I described and encountered, this system has the opportunity fit into a niche that companies such as B&O held on for years. 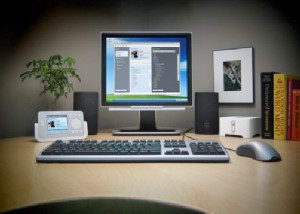