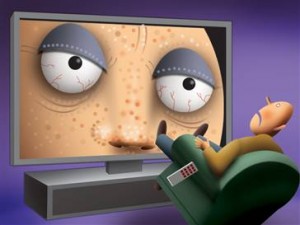 You’d think that HDTV wouldn’t have haters.  You’d think that most people would love the HDTV, with its improved clarity and better sound and more slots and better fit into any home theatre setup.  But no, this is sadly not the case.  Apparently over at MSNBC, they don’t like the HDTV.  Maybe it’s got something to do with Keith Olbermann, but anyway, MSNBC’s got five big problems with HDTV.

Apparently MSNBC takes issue with the “real life” display of most folks, blemishes, shaving nicks, pores, sweat and all.  Okay, maybe it DOES have something to do with Keith Olbermann.

The Edge of Black

Since not every TV show is presented in HD yet, some shows come presented with black bars on the sides that cut the viewing area of the screen.  This could be regarded as a problem, but time is one thing that should fix this up nicely.  Plus, most cable or satellite providers offer HD lineups.

Not All HD Is HD

One network news channel’s HD looks crisp and sharp but the rival network’s show doesn’t.  Of course at this point, some would say “then just watch the GOOD one, duh” and let the market prove who’s got the best HDTV.  But that’s not an option for MSNBC, apparently.

If I have to hear about overpriced cables one more time I think I’m gonna take a pair of Monsters, twist them up into a noose and HANG MYSELF.  Yes, some cables are overpriced.  But not all HDMI cables are overpriced, and HDMI is a solid format for transmitting HD signals.  What is everyone’s problem with this?

Okay, sure…some HDTVs aren’t ready out of the box and need some calibration.  But you don’t need a three hundred dollar trip to the geek squad at your local Best Buy–a twenty to forty dollar calibration DVD will do the job just fine.  But apparently MSNBC doesn’t read Cyber Theater, because if they DID, they’d know about the FREE CALIBRATION UTILITY AVAILABLE FOR DOWNLOAD.

So some people do still have a hate-on for HDTV.  But if they give it some time, and a little understanding, I bet they’ll get just as much out of it as we do.